RDX is a good contender. The only thing to consider is the frequent usage of ‘radix’ only when ‘radix mark’ is meant. But maybe that will aid the correct understanding of radix.

Learned something again. However, I would still rather locate 'radix' with complex numbers.

Since decimal fractions and negative numbers are not welcome in the BASE menu, why not use 'cardinal number' (CRD)?
DM42 SN:00032
Top

I like BASE... There are other long words out there (with more than 4 letters). Are they to be chopped as well?
DM42 #40 running C43 | DM41X #50 | various HP models
The earth is flat. It just appears round because it is massive and curves spacetime.
Top


'LASTx' over [x<>y] hung over almost to [ENTER]. On this line, the scrum is most noticeable because the key spacing is narrower, but it already has menu labels. I think, with the search for a TLA for 'BASE' the space taken up by 'MODE BASE' becomes a bit smaller and you can put 'LSTx EXP' symmetrically over [x<>y]. But I myself would also do without the symmetry over [x<>y] and vote again for keeping 'BASE'. (Is it actually possible to throw several votes into the urn without anyone noticing?)
DM42 SN:00032
Top

No wonder I have votes/voters > 1. Confirming what Dani said, we are between a rock and a hard place in that area. The simulator text font is smaller than the artwork font, and the simulator is substantially larger on screen than the real calculator, both of which makes it seem to fit easily. Either way, I am impressed by his reference to scrum, glad the sport is understood by the central European heritages

I do not intend to chop others, but it would immensely help if we could relax that tight little area which has two 4-letter words with wider letters. We have no TLAs in use and I favour an abbreviation that immediately resembles the concept. The only non-single word abbreviations we have are X.FN, P.FN and I/O, all three of which are marked with a delimiter.

In terms of integer number operations, we have INTS for integer arithmetic and BITS for boolean and bit operations. I would have liked like the (BASE) menu to refer to short integers, but SNT and SHT don't jump out with the correct meaning. BIN does tell the reader exactly what to expect, in the same way as BITS and INTS do.

BIN seems the best alternative we have, unless there are more words or more pleas. 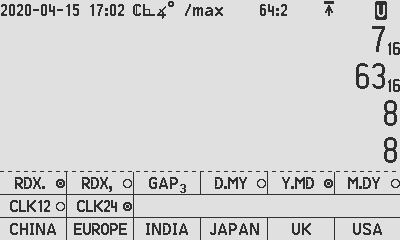 Illustration of how BIN and LSTx could look.
.

Your call, but I'd say BIN only covers a small subset of the ground, and also is misleading. I'd expect to BIN to give me a menu with binary operations.
DM42 #40 running C43 | DM41X #50 | various HP models
The earth is flat. It just appears round because it is massive and curves spacetime.
Top

It is possible to use # as long as we choose letters to avoid confusion. Potential confusion is that # is already on g[1/x] and is used to enter shortints or change to arbitrary bases 2-16.

The concept of a command & similar menu, # and #BA is similar to the COMPLEX command and CPX menu.

The options would be maybe:

NUM, as in numeral system, which is related to radix?