keithdalby wrote: ↑
Tue Jun 05, 2018 8:21 am
I have no use for the source code (nor all this fuss about it), so I'll just wait for the next normal firmware update and update as normal. I don't see the point of updating the firmware when there is no functional difference between the last firmware version and this new open source one.

And after all one may remember, that the fruits they pick, are grown by all that nerds/geeks/freak (meant only positively...I
consider myself being a "nerd") which /are/ interested in the source code and spend hours and hours of there spare time to make those
fruits even more tasty, healthy and bug free for those who are interested in these fruits.

Examples ?
Android Smartphones ==> Linux
Rockbox driven MP3-Players
Fritz!Box-Os ==> Linux
"Smart devices", which also run Linux under their hood.
This forum software is OpenSource (I think...)
Dozens of other devices, which run some kind of Linux variant under their hood.
The GIMP, Blender, PHP. Perl, Lua, Mecrisp-Stellaris FORTH, gcc, gdb, ....
And now the Free42 part of the DM42 is OpenSource.
I am sure, Thomas has spent really a LOT of time being interested in the source code
of Free42.
A BIG "Thank you" to Thomas, Michael, David and all other unnamed persons, who build
what others use.
Amen.

Only my two cent. Your mileage may vary...

short intermezzo:
I flashed both firmware files to my DM42...works flawlessly with the additional instructions (done via Linux).
In the next day I will keep an eye on the "look and feel" and the functionality of my DM42.

Sorry, but just one more clarification:

My understanding is that you just have to flash once DMCP_flash_X.Y.bin which is the OS of the DM42. Then every time you want to use a new DM42xxxx.pgm, you just copy the .pgm from the PC/MAC to the FAT partition of the DM42, then you go to the DMCP menu (Shift SETUP>System>4. Reset to DMCP menu) and there you Load your new .pgm and Run it.

Ok, I have managed to build and flash 3.7.1 by using DMCP_flash_3.7.bin and my own .pgm binary.
Few findings (if it not something with my build/flashing): 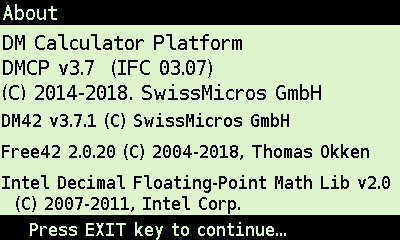 Maybe we should create a separate HowTo thread?
Top