I am not sure, either, just a guess.

Anyhow - thanks for the info!

Hi Thomas, this should be the full character set. 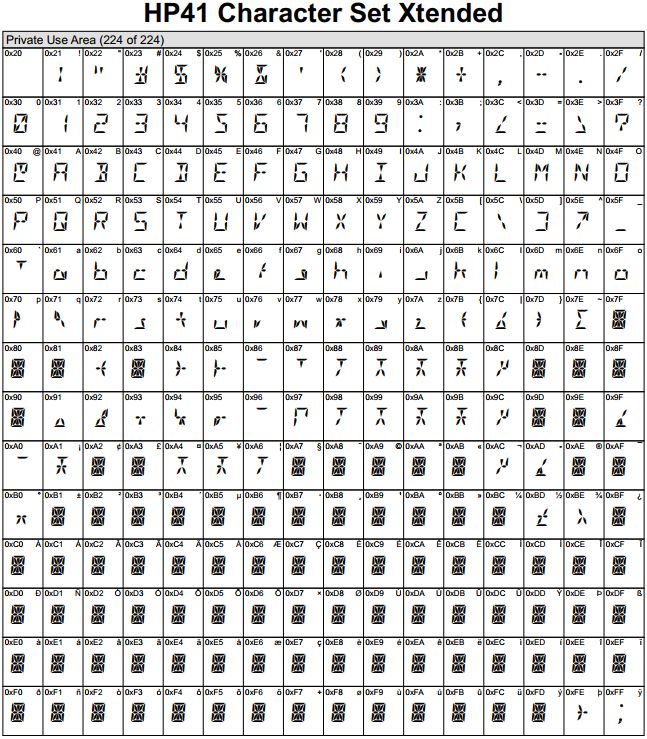 Yes, I tried that - very similar to the bug I described in PCC V10N7P19 a long time ago

It is almost the opposite of the one I described earlier:

The display now shows: "+: :a : :" (6 characters) where I would have expected only 4 characters: "#:#:"
('+' is the append character and '#' is a starburst).
(Also note that there is an extra space shown here after 'a' since the post sometimes treats ':' as an escape character when entering text).

In your case, both the space and the colon is deleted by every delete, and here, even if it is only a single character (internaly), delete treats the character as two ...

But 0xA0 it "text" and 0xA1 is "a" on the DM41X.
So all characters are there (and I haven't seen any other characters in the DM41X not in this table) but the codes are different.

Eeny, meeny, miny, moe
why do we need three μ?

So there is a lot of duplictes in the full byte table ...

This is the complete character map as I have found it (in the DM41X): 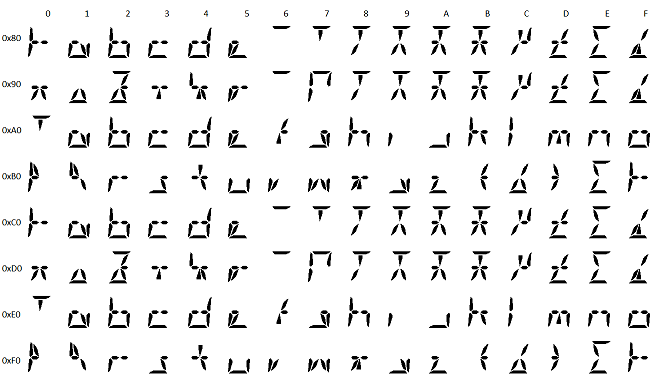 Again, note that all characters in the upper table always are displayed together with a colon, and in multi line [PRGM] mode these characters are displayed with the MSB-bit cleared (eg. character 0xA7 (g) is shown as 0x27 (')) - unless the line is highlighted and [SHIFT] is pressed

The lower table have been extended (compared to the HP41) with all lower case characters, and the three characters 0x7B-0x7D.
There are also 7 new symbols in the upper table that are not present in the lower (0x90-0x95 and 0x97).

So Massimo, as you see, all characters from the table you provided are here, but some at different location(s).
This means that there are actually 5 copies of μ in the table ...

But the all time high winner is Sigma! There are 7 character codes that are presented as Sigma on the DM41X ...


Is this a hardware or a software issue?

Turns out there is a way to have all the lowercase characters while preserving display of upper character (80-FF) as starbursts. So as I said, not an issue at all...