If you're having problems with the hardware of a DM41X or DM42, post about them here.
Post Reply
15 posts

Just got my new DM 42. It looks awesome. There is only one problem i havent been able to use it because the buttons 1,2,3,4,5,6,7,8 do not respond at all when i press them. i tried to take the cover off and release the screws so i could press the buttons directly. but they do not respond. Anyone had that kind of problem and if so how did you fix it.
Last edited by AlexanderJS on Thu May 21, 2020 10:31 pm, edited 1 time in total.
Top

Please forgive me, but these buttons look pretty in the lower middle to me.

Perhaps you meant something different - please elaborate a bit. It will make it easier to help.
DM42 SN: 00041 Beta
WP 43S running on this device

I also had a few keys that were not responding well--they would require much more force beyond the tactile feedback. I've been a DM42 user for years, so I knew that the first thing to try was:
Disassemble the calculator by removing the back cover, then release the LCD ribbon cable to release the PCB board. Then carefully peel back the adhesive strip and clean the contact areas with isopropyl alcohol between the domes and the contacts. This worked for me. All the keys now function as you would expect.
Top

Like others, I have disassembled the calculator to fix a keyboard problem - but in my case, only one key, which would sometimes - no more than 1% of the time - not register a press. (Cleaning the contact solved the problem.) If you have a new calculator with 8 keys not registering well, or not registering at all, I think you are fully entitled to ask for an exchange. That sort of keyboard problem is well outside what you should be expected to repair yourself!

Edit for clarification: in case it isn't clear, I think that the DM42 is a great piece of hardware. You should have the highest expectations of it!
Top

A work in a relatively large studio space which has to rely on a hefty amount of ventilation during the spring/summer/autumn months and as such the space suffers with a more than average amounts of dust. As a result of this, I've found something of a flaw in the otherwise wonderful DM... industrial design. Yesterday I took my device apart to fix the stiffness of the key action and to clean the contacts and suchlike (having owned it for approximately one month) and I was shocked to see the amount of dust that had got inside the device in a very short space of time. The key housing has substantial gaps and the USB and IR apertures also feature air gaps. The dust that collects is one of the things that affects the register of contacts but luckily this is easy to remedy. The worse problem is that lots of dust particles find there way between the LCD and the glass panel on the front of the calculator, an area that that doesn't seem to be accessible without risk of permanent damage.

To help remedy the situation I've laid thin strips of Blu Tack to help block the circulation of dust particles (especially behind the apertures at the top of the device but also in a perimeter rectangle roughly the size of the keys real estate).

I love the fact that the design of the DM... hardware has been created to allow easy access for maintenance or to change components like the Flash Memory but a device shouldn't be letting in this many dust particles even in an evironment which suffers more than average particulate.

All of the dust particles in the picture below are under the glass and inaccessible. I'm sure most people would agree that this is a very unsatisfactory situation. I wish I'd taken a picture of the accessible parts of the device before cleaning; it was akin to a light dusting of snow throughout the device internals. 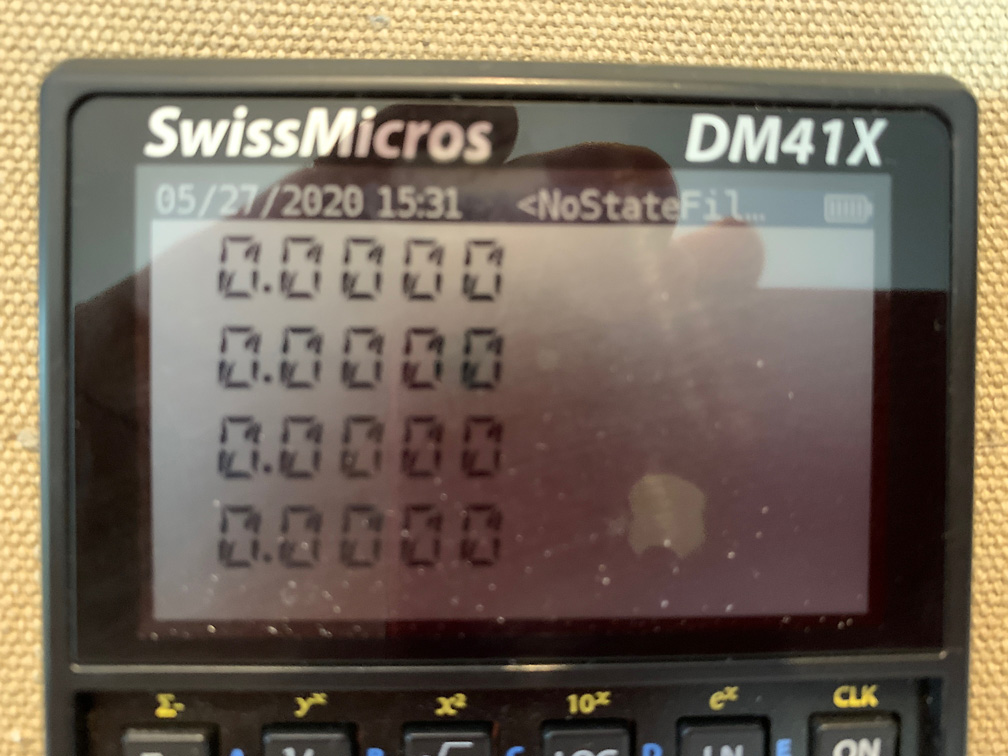 That amount would send me over the wall

I wish the underside of the glass was accessible or that I could ‘blow’ it away.

I would be more worried about what goes into my lungs.
Greetings,
Massimo
ajcaton
-+×÷ left is right and right is wrong

Don't get me wrong, it's not exceptionally dusty. Cleaners come in three mornings a week and the few of us who share the space are a relatively hygiene bunch. It's just that its a very well lit space with lots of glass so once the sun starts shining the fans are on 24/7 and many windows are open. That simply means you have to keep on top of things (seeing as we're situated by a busy main road with vehicles creating a constant maelstrom of urban detritus).

I don't keep my 41x in a pouch, it's generally on my desk 24/7, but I certainly don't bring it with me with out youngest's regular outings to the sandpit.

I noticed particulate slotting into the space between the lcd and the glass panel within a few days of ownership but was relaxed about it knowing that it was a relatively simple disassembly process and it was my intention to clean the lcd are when tackling the stiff keys. It was only at that point that I realised that the lcd appears to be glued into place and I wasn't willing to risk to process of finding out whether a little force would bring any joy.

I must admit I'm more than a little upset that the situation has arisen at all. The fact that the key housing is effectively akin to motor cars front grill is a terrible industrial design oversight. And much the same could be said for the air gaps around to USB and IR component housing. The final irritation being the housing for the LCD. If you're going to design it such that the customer can't clean the space between the lcd and the glass frontage, it least make sure that it's sealed off so that particulate can't squeeze into to the gap.

It's a relatively large sum of money for a calculator and for it to get so easily soiled internally by particulate isn't to be expected considering I've owned for such a short period of time. The 41x shares desk space with a 50g and a 49g+ (running newRPL) and the 50g is like new after years of use/abuse. The 49g+ of course suffers a few wonky keys but that's far older than the 50g and the keyboard wasn't that great to start with, but neither of them have dust particles obscuring their lcd's.

To put things into perspective, I'll put up with the situation, as there's little other choice other than risking bricking the thing altogether. And it won't stop me from purchasing a 43s when the time comes, but I'll obviously be applying a spot of DIY on the day it arrives if the current design flaws haven't been remedied.
Top

The glass on a DM42/DM41X CAN be removed from the plastic frame, leaving the LCD in-place (to clean between glass/LCD, or move the LCD to a new plastic frame, etc.). The procedure is pretty easy, but a bit unnerving, as it doesn't feel easy when doing it.

There are strips of adhesive along the edges of the glass, that fix it to the plastic frame. After disassembling the unit (remove the LCD ribbon cable and remove the board), you can soften the adhesive somewhat by heating it (e.g. using items like the iOpener gel bar from iFixit) and then you simply twist the frame trying to find a gap under the bottom edge of the glass, just above the top of the keyboard. I found it easier to access the left side than the right; no idea why, that could simply be my unit.

You have to twist it harder than you might think, but do it slowly and be ready with a spudger or pointed wooden dowel to insert under the glass. Also, note that when stressed this way, the weak spot is the edge of the frame where the keyboard and LCD meet - you will see the plastic color get 'lighter' as you twist and stress it. Once the initial separation has been made, and you've got something under the edge, you can gently push on the back side of the glass through holes along the edge of the plastic frame to fully separate it from the frame. Be sure to not let the adhesive strips get dirty, as they will be holding it down once you put it back together after cleaning.

Of course any such activity is not covered by any warranty and you risk damaging your device, so please don't try this unless you are willing to accept that you could damage it. I'm not really encouraging anyone to do this, however I thought it might be useful to know that it can be done for those (cough, Geoff) that really need to clean dust.
--bob p