It is time for an update again, for the WP43C DM42 platform and the Windows simulator.

The files can be found here, download. I do not have the differences document ready as yet. So many things changed, so I need some time to update the screen images etc.

We, that is inautilus and I, are making very good progress on the graphic for the DM42 WP43C keyboard template. During this work, in the process of positioning the labels, we realised that the central part is fairly congested, so I really want to shorten two keywords:

LASTx can become LSTx, which is not a problem as LSTx looks almost like LASTx.
BASE, on g[CHS] is just one character too long and as a test I used BAS on the pic below. To remind you, BASE is the menu with a collection of word length, number base and type conversion functions.

Options I have for BASE is Any help with a new name for BASE?

Below is the simulator picture of the WP43C with a little facelift, based on some of the bits we are making for the keyplate artwork incorporated in the simulator, like the colours, and the icons. Note that these pictures below are still just simulator images on Windows, not the artwork for the key plates.

On the left is a simulator In normal mode, and on the right, a simulator with the optional U_SHFT KEYS pack activated in USER mode. Note the use of thin colour lines on the real DM42 template indicating the changing keys. On the white lines, the key function can change in user mode, i.e. in this case USER on Σ+ and TRIG on SIN. Also the coloured lines where COS and TAN will function as shifts.

A new addition is illustrated in the softmenu shown (accessed by HOME Dn Dn) which shows dynamic content (buttons), containing the actual key functions as they would change after Assigned with ASN between normal and user modes. With this menu, you have a live indication of where your changed keys are. This is useful for the KEYS packs of keys. In the picture, the third key row is shown in the menu with STO RCL ..., complete with f and g functions indicated on the softmenu.

This additional basically is an upgrade of the previous lookup softmenu table that I made to guide a user as to where the hidden blue labels on the DM42 layout are located. It still does that, but it is now live updated, with the USER mode assigns. 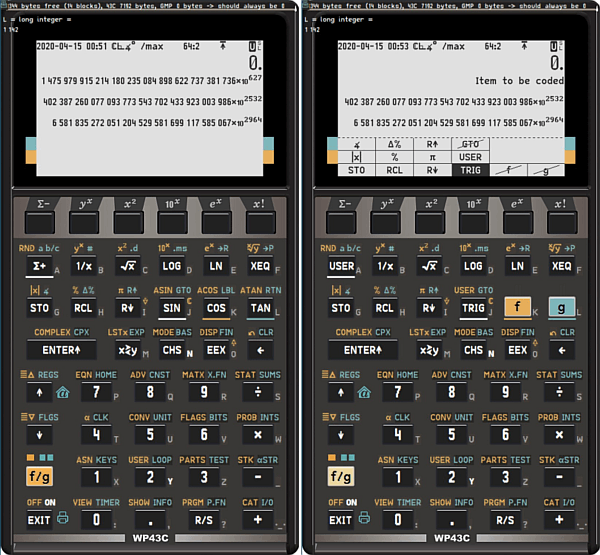 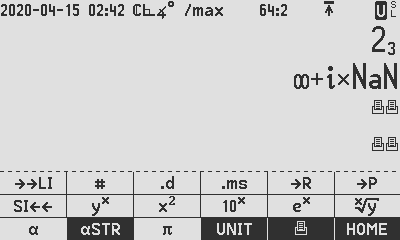 In this screen shot it is shown that the top row of keys below the FN keys were re-assigned to be ⍺, ⍺STR menu, 𝝿, UNIT menu, PRINT menu, and HOME. The keys are assigned, and of course on the DM42 you cannot see keys are assigned like on the emulator picture. With this menu you can see all the keyboard re-allocations.
.
--
On a previous post I showed that I wrote a function to display the statistical data on an XY graph that auto scales. I had sample graphs shown. Somebody mentioned that we should be able to edit that data. That is not done yet, but I did add a feature where you can list the last 10 data points. It cannot scroll as yet, but already it is useful to see which points are in there while entering. See below.
.

Nice post Jaco! These images and comments help a lot (!) to clarify some of the concepts discussed recently. I still think much of the assigned keys stuff needs to be test driven on real h/w before fully groking, but I feel far less 'behind' the curve after reading this.

As for BASE alternative:

Would 'Base' be OK? It's shorter than all caps, but not sure if you want to introduce lower case just for this.

The RPL machines use '#' on the keyboard for the symbol used to enter binary digits of arbitrary base. But, generally speaking, RPN fans following the 34S and 43S/43C are not RPL users and this may not be familiar.

For me, for a 3-letter name, HEX would be a bit better than BIN, though either would easily remind me of the BASE features.

I'll keep thinking about it....

Thanks for the update.
--bob p

For me a BIN menu would be fine. HEX is too specific for me, then you could also use DEC or OCT.

INT would fit somehow, but I don't think you should use this for a menu name.

But you could also create a new name from: But I think you just have to leave it at BASE and find the balance with micrometer steps.

To add to the list a little longer: I still think you have to leave it at BASE.
16C is probably not something you can use.

A bit of history:
The reason that there is a BASE while 43S does not have BASE, started because in the Layout L42 there is an actual BASE label on the DM42, and the customary HEX BIN OCT DEC is not on the 43S. Also most other content is found in different 43S menus. So we needed a separate menu and it is logical to have base conversations, word length, lead0 and integer type conversation all together in BASE.

On Layout1 we do not have ‘BASE’, but I still need the menu (not negotiable) but we can call it something else if need be.

Currently the best alternative offer is BIN for the reason in Dani’s last post, i.e.:

Or some abbreviation of radix, e.g. RAD (if you can look past the possible confusion with radians, that is - but as long as there's no DEG on the keyboard, this might be a reasonable expecation), RDX, etc?
DM42 #40 running C43 | DM41X #50 | various HP models
The earth is flat. It just appears round because it is massive and curves spacetime.
Top

Hope they talk nicely to each other (SCNR).

Or some abbreviation of radix, e.g. RAD (if you can look past the possible confusion with radians, that is - but as long as there's no DEG on the keyboard, this might be a reasonable expecation), RDX, etc?

RAD is out. Radians is just too well known as RAD.