The Beta programme is where a device becomes fully formed. If you have any suggestions for features to integrate into the DM41X then feel free to make them here. We can't guarantee that they'll all end up in the final product but we'll certainly consider all sensible proposals.
Post Reply
2 posts • Page 1 of 1

Feels a little odd suggesting a new feature considering my DM41x has yet to arrive (7 days and counting from Switzerland to the UK...). But here goes.

However, first a little background by way of introduction. My first HP calculator was a 15c, which served me well though my A-Level years (aged 16-18), and I progressed onto a 41cx when I went to university (1985-1988). The 90's into the early oo's were my PDA years (Apple Newton then various Palm's, especially the Sony Clie variety) but I still carried either/or/both the 15c & 41cx until I discovered to the delights of first a wonky keyed 49+ and then a better keyed 50g (still use both to this day, one running beta newRPL builds, the other, stock 2.15 OS). Shamefully, I long ago succumbed to the 'filthy lucre' of eBay and parted company with my 41cx but the sale was in part lubricated by the availability of i41CX+ on iOS. I expected it to be a mere dalliance (par for the course for most iOS calculator clones) but I found myself drawn ever deeper to its capabilities mainly due to the talents of one man - Ángel Martin.

As you can imagine, my interests in the DM41x project were especially piqued when I read that Ángel was involved. For me Ángel is a perfect mix of archivist, alchemist and Viktor Frankenstein! Much as I dabble in a mix of Rom configurations in i41CX+, my 'dessert island' configuration is as follows: 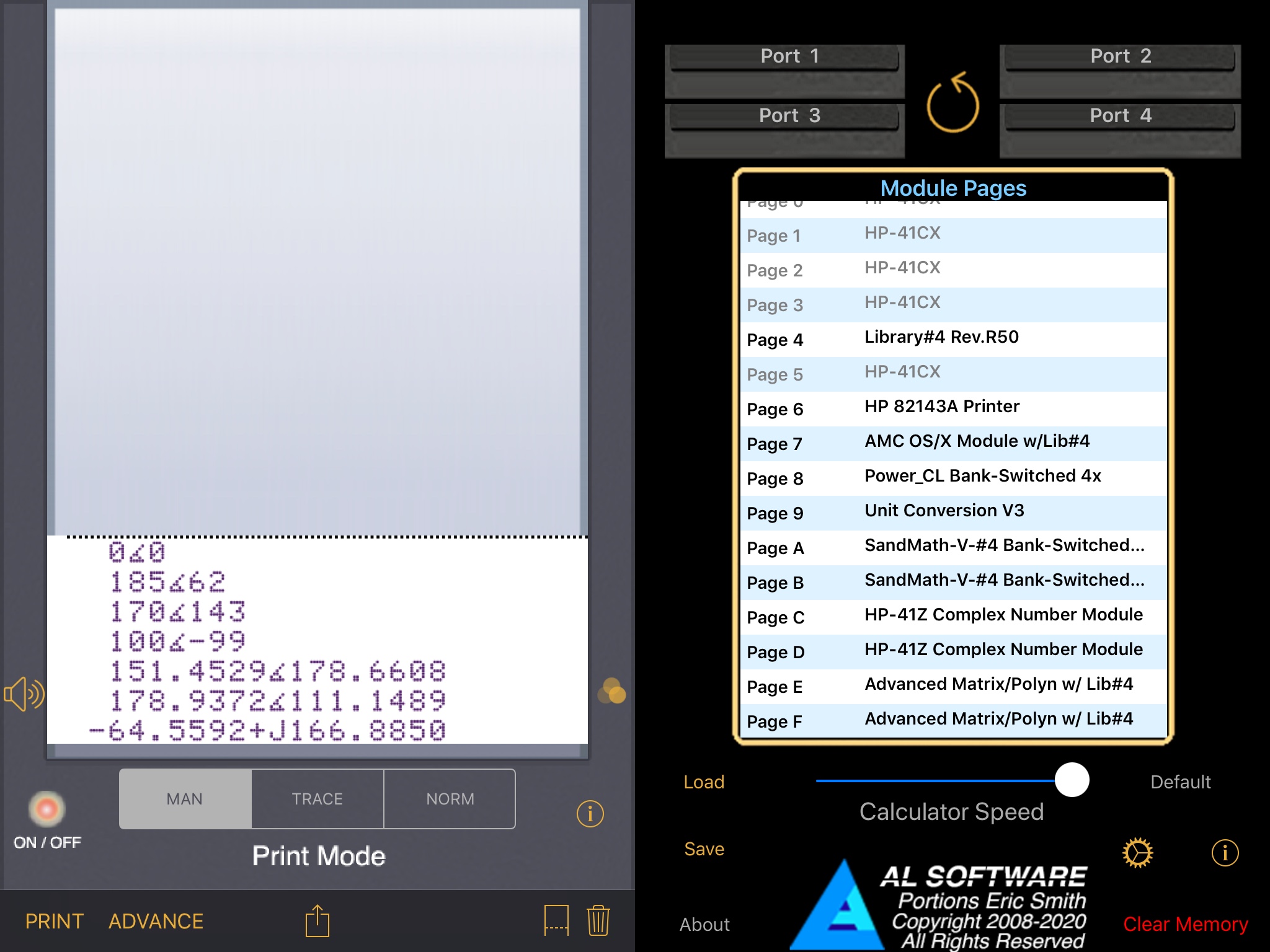 And it's this particular configuration that has triggered this virtual print buffer feature request. I've found that both SandMatrix and the complex math module (41Z) commonly lead to situations where the calculator display is unable to display the calculation result fully. The following screen is an apt example of this behaviour (a simple polar addition followed by a conversion to rectangular format). This calculation is one of the examples in the 41Z documentation (a 35s example transferred to the 41): 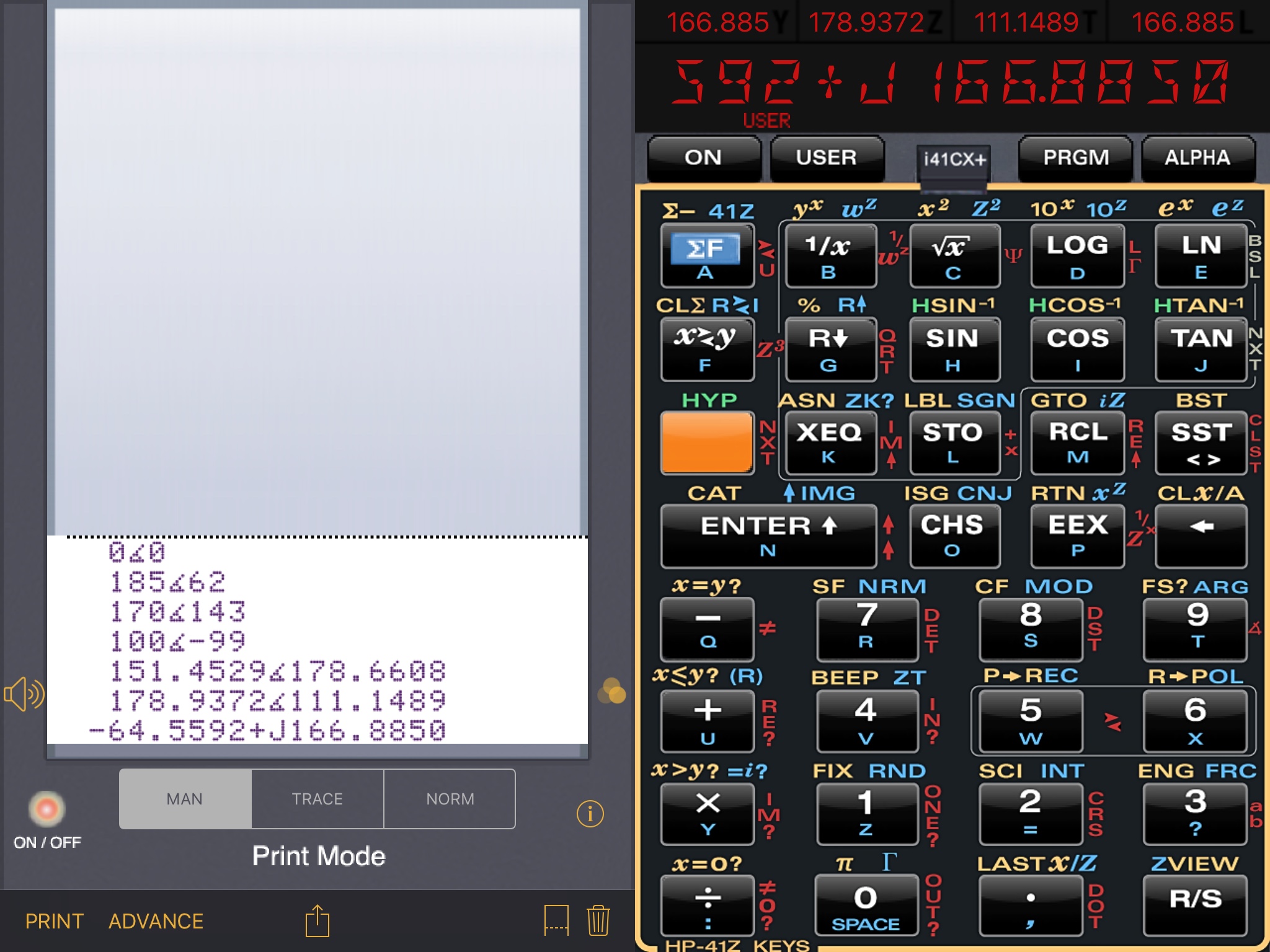 Complex number calculations usually end up with results that overflow the 41 display and the old school way of handling this situation would be to A.) rely on an infra-red printer or B.) display the real and imaginary parts separately (and this wasn't always glitch free).

I fully understand that the 41cx emulation on the DM- platform is restricted to vanilla 41cx capabilities but I was hopping for better use of that wonderful DM- e-ink style display:

As sharp as the segmented font of the 41 looks, simply displaying X, Y, Z & T registers (plus the second alpha display) feels a little wasteful of the available screen real-estate/resolution of the 'e-ink' LCD. Something I especially like about the i41CX+ is the efficiency of it's 'LCD component'. It's a minor part of the overall real-estate yet communicates the full stack and Last X values.

An adaption of the 50/50 display on the DM41x looks to be an ideal candidate for a virtual printer display. It need only display 3/4 lines of values but they would very valuable to most users. It needn't animate, the simple ability to view the latest lines would be enough (with maybe a paging capability to extend the number of output lines viewable by the user).

On a separate but connected note. Christoph Gießelink has a virtual thermal printer emulator (for Windows) that allows 48 series devices to virtually print via their wired tether connection (be that USB - 49g+/50g, or serial - earlier 48 series units). This may already be a feature of DM hardware but I was unable to find any info about this on the forum as Printer is reported as in illegal search term on the forum search as it's apparently too common a search term!. If it's not already a feature of DM hardware, it would another great 'nice-to-have' feature.

I did notice another cunning 41x customer has rolled his own IR receiver via budget Arduino kit and that's definitely something I'll be exploring myself but I'd ideally like the 41x to be a handheld device that provides sufficient visual feedback of complex and matrix math results without the need of secondary devices be they printers of the virtual or hardware kind.

Much as my calculator history would make it appear that I'm mainly interested in the DM41x for 'nostalgia' related rationale; the truth is far from that obvious appearance. I'm hopping that the 41x can replace my use of i41CX+, which over time has proved to me that 1,) precision isn't everything when it comes to great calculator UX and 2). a balanced well designed set of modules (which for my use cases are Ángel Martin's Sand-suite roms) outclass anything HP have pre-packaged over the years (I know that's a bold claim but SandMath, SandMatrix and 41Z in tandem deliver on that claim for me). It goes without saying that the forthcoming WP43s is on my shopping list too, but for very different reasons.
Top

What a nice suggestion!
Just a simple answer to make it appear on top of the list.