Whenever I get my hands on a new 41 calculator (let it be a real thing, an emulator or something else), I always try to download the PPC ROM and run the display test program ("DT").

On a real calculator, and on some PC emulators (like V41) this works fine, eg all segments are lit:


But on others, like the DM41X or the Android emulator go41cx, it only shows some of the segments: (I would have expected that the alpha register would be the same as the original, the x-register is as expected.)

Is there someone who can explain this difference?

by rprosperi
Yes, this is not a bug or a problem, this is a result of the changes needed to implement the multi-line editor in PRGM mode.

You will likely recall that at the end of DT, the 41C is left in PRGM mode, requiring the user to press [PRGM] [R/S] to complete the test. Until the multi-line editor was refined for several 'cosmetic' changes, DT ran properly in the sense that the visual result was the same, with all LCD segments on. The emulation changes to create the appearance of multiple lines in PRGM interfere with what DT simplistically assumes.

Note the same is true is with the Alpha register display - most people never noticed the Alpha display was left filled with characters after DT was run, but this is revealed on the 41X's SI_XA view.

Good catch, thanks for checking this out, and sorry (actually I'm not) to swat the first bug report so quickly.

by EM41
It was already reported by Geoff during the beta test viewtopic.php?f=26&t=2448
I think it was the only non resolved "bug".

AND... thank you!! I could not recall the name/module for DTST, though I suppose it should be obvious enough...

It's not an issue at all. Run DTST in Angel's OSX module and you will see the expected result of ALL (emulation) LCD segments turned ON.

The DT program in the PPC ROM does the same thing on a real 41C, however it uses PRGM mode to accomplish that and on the 41X the multi-line editor prevents that approach from working the same way.

I don't buy that this is due to the multiline edit in PRGM mode ...

Now, on my real 41CX I see 1 character with all segments turned on followed by a single colon - just as I expected.

On V41 by Furlow it shows the same, again as expected. 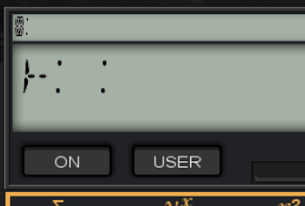 As you see, the alpha register at the top shows the content as expected, but not when the alpha reg is shown in the display.

On the DM41X it is always shown as an append character followed by two colons.

Also, if you delete the characters, they are treated as separate characters in the display:

The dispaly now shows: "+: :a : :" (6 characters) where I would have expected only 4 characters: "#:#:"
('+' is the append character and '#' is a full segment).
(Also note that there is an extra space shown here after 'a' since the post sometimes treats ':' as an escape character when entering text).

So, I have deleted 4 characters, but "+:" is still shown in the display - even if alpha is empty (turn alpha on/off will clear what is shown).

My guess is that this is a bug in displaying characters with code larger than 127, and the bug is present in eg. go41cx (which doesn't have multiline edit) and is probably inherited somehow into DM41X since it is not present in the real device nor in eg. V41.

This is not a serious bug, it doesn't affect any data as far as I can see, only what is shown in the display but may show erronous results when dealing with characters codes above 127.

by ecsfang
Still no-one who can explain why DM41X can't handle characters with code > 127 correctly in the display?

This shows two characters (append sign and a colon) - but is should show (and is internally) only one character.
We can even delete one of these "two" characters:

The colon is deleted, and the append sign is still visible - but the alpha reg is actually empty (as it should be).

I still think this is the reason why the PPC ROM "DT" routine doesn't work - and that it is not related to multi line in PRGM mode - sorry ...

Would have been more fun if codes [128..255] had new characters assigned to them - an easy way to extend the possibilities (not backwards compatible - but at least we could do some "poor mans graphic") since I guess that the display driver is outside the actual ROM and is handled by the emulator within the DM41X ...

By no means complete .. just some examples:

by ecsfang
Another consequence this "bug" also have, is when viewing synthetic text-strings in programs.
Depending on the mode, a string is shown differently.

2. In multiline mode a completly different string appears as follows: Note that these characters corresponds to character code 0-14

3. If the prgram-line is highlighted and [SHIFT] is pressed, then the display changes: 4. If you singlestep this line, so the string is added to the alpha register, then the "colon"'-string is shown as well.

This "soft-bug" has no serious implications, but when comparing a program listing between a HP41 and the DM41X, then synthetic string will most likely differs, both in program mode and what is shown in alpha register. Eg. when singlestepping the program, what is shown on the program line doesn't correspond to what will end up in the alpha register.


Now try entering that string in a program (needs a bytegrabber or other tool).
Then in multiline prgm-mode, highlight the line with this string and then press [SHIFT] ...
Notice how the display will toggle between "(%((/" and "h:e:l:l:o :" depending on if [SHIFT] is pressed or not ...