keithdalby wrote: ↑
Sun Jan 21, 2018 3:56 pm
Back in February 2016 Michael posted a video of a landscape DM42L prototype. He commented on the video stating that the screen on the prototype was the same resolution as the screen on the original HP-42s. The prototype ran Free42. From what I could gather, the biggest challenge was the positioning of the soft menu keys. I believe (based on what I've read) that the alignment of the soft keys was the main motivation for moving to a portrait model; however, I also recall Michael saying that reallocating/binding the keys was a straightforward matter.

The landscape DM42 prototype has two hardware-related problems that are simply not solvable without a redesign:

First, the on-screen menu labels can't be made to physically align with the corresponding keys. The numeric keypad is in the way. Assuming you don't want to compromise the traditional layout of the number keys, and having the arithmetic keys in a vertical column next to the number keys, the only place for the six menu keys is to start from the top left corner, which means that the display would have to move as far left as it can go. This may not be a huge challenge, but it would change the esthetic, and it would mean that they can't use the same hardware as the SM Voyager clones.

The second problem is the display itself. 132x16 does sound tantalizingly close to the HP-42S' 131x16, except the latter also has seven status annunciators across the top of the display. Where are you going to put those? So you need a display with more vertical pixels, but not too many more. Does something like that exist? I'm guessing SwissMicros doesn't sell the kind of quantities they'd need to sell in order to make a custom-built display a viable option.

I assume solutions can be found, and I seem to remember Michael hinting that he was confident the DM42L could be made to work. I guess we'll have to wait and see.
Top

It must have been two or three years ago when I started an overlay generator, see http://www.swissmicros.com/overlaygenerator/
I never really finished it and I'm not sure how practical it is. Perhaps not everything works as it intended.
Also, it was never tested much, so please don't expect it from being bug free.
However, please feel free using it and make suggestions how the buttons of a DM42L could be arranged.

EDIT: this was intended for the credit card sized models, but still could help illustrating the button arrangement for the larger model
Top

Ok, Keith, I think your vote is counted.

Just for sake of clarity, a DM42L as sketched by you after the DM42(P) as available doesn't make sense from my point of view. It would be actually a major step back: a) no dedicated softkeys, b) smaller LCD, c) a keyboard layout designed for a portrait HP-42S cut in halves for putting on a landscape calculator, d) the points Thomas made. Not worth the time and money for development IMHO.

I must admit I found the DM41L pretty weird already - but SM didn't have any portrait calculators at that time so it looked like extending their line at least. Nowadays, however, a DM41P featuring I/O like DM42 plus benefitting from the big display plus some way of loading ROM images would make more sense than a crippled DM42L. YMMV.
DM42 SN: 00041 Beta
WP 43S running on this device

Thank you all for your comments, a lot more to ponder. I'll try to resist the urge to mention it again.

Michael, is there a template for the DM-41L keyboard so that a card overlay can be made with user-defined custom key allocations printed on? With that, once programmed and with keys relabelled, the DM-41L would do nicely

Walter wrote: ↑
Sun Jan 21, 2018 4:31 pm
... Nowadays, however, a DM41P featuring I/O like DM42 plus benefitting from the big display plus some way of loading ROM images would make more sense than a crippled DM42L. YMMV.

keithdalby wrote: ↑
Sun Jan 21, 2018 3:56 pm
So, with that in mind, I guess I'm just trying to decide whether to splash out on a DM41L to tide me over or hang on for the DM42L which may or may not appear in the future - a model that, it appears to me, already exists (well, at least one unit does). I'm not made of money, so buying both might not be an option.

All I can say about the DM42L is that it's not ruled out. As yet there are no definite plans to proceed with the design even if there are provisions for it in parts of the firmware (ever wondered why there's no GrMod 1 for the DM42?) in case the idea becomes a reality, but that's all. If you're going to be looking for a new calculator in the next few months then I'd recommend that you go for the DM41L if you want a landscape format RPN machine.

Before you ask, no I don't get a kickback from SwissMicros for machines sold on my recommendation

There are only 10 kinds of people in the world: those who understand binary and those who do not.
Top

I wonder if non-loser folk have similar dilemmas about things they care about, like shoes or soccerball teams or what version of the Dune film to watch. I'm so far removed from the non-loser people, I don't even know what dilemmas they might have!

There's only ONE Dune film! The others are imposters.

If you are referring to the David Lynch one, you still have to decide which "cut" to watch. I only know of one non-Lynch movie which was more of a recorded theatrical production. But how about the multitude of versions of Army of Darkness / Evil Dead?

EDIT: this was intended for the credit card sized models, but still could help illustrating the button arrangement for the larger model


I am in with a credit card size model. 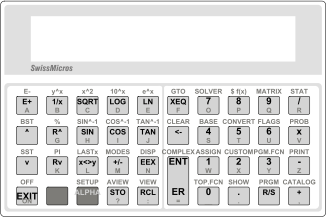