I'm so glad I'm in such good company!

This was actually quite strange voting for whether H2X is alone or not ...

Either way, after that I got another suggestion of #BC, which conflicted with the existing BC?, so it seems that we were gravitating towards RAPo’s #BA. That was until I actually got #B, #BA and BASE placed on the graphical layouts (thanks to inautilus again), and as they say the proof of the pudding is in the eating, so ...

Thank you all who participated, for a very productive session on all about the base … my answer to all the input received is that BASE stays. The final thinking was that I would only save enough space by using the very short #B, and honestly, #B looks good (graphically), but I really does not look effective in communicating and it does not emphasise that it is a menu. #BA is longer and does not save enough space, so I might as well then have the real BASE without compromises. The space saved by chopping the A of LASTx was significant already. I was attempting to get more balance, but it does not work. BASE doesn't look bad - I think I was trying to go from (1-e^-999) to (1-e^-1000) in retrospect. But no harm done - a good analysis with options, proved that BASE is good.

I also decided to list my partially updated document v049, which is still half done, as well, especially to illustrate the concepts of the assigned keys and the dynamic HOME menus displaying the actual assigned keys. This is attempted graphically on pages 13 - 15 of the draft document. All sorts of extras are being added such as the table requested a few weeks ago with all special keys, and a section on how operation is different in pages 22 - 23, etc.

I made a very basic landing page to help me distribute the files, here with links to the document, the simulators, and the DM42 firmware.

Also linked from there is the document that Nigel prepared on my request, for a quick start on the DM42. Nigel explains what exactly can be expected when you run the WP43C on the DM42. Nigel also runs his WP43C for normal day to day calculating tasks, which was exactly what I set out to do with this project, i.e. to be able to use my WP43S every day on my DM42, and so WP43C was born.

Bonus: Now the other proposed, good names are still available to be put to even better use in future menus, should deserving features be added in the software for which they are the perfect match. Which might very well happen, given the open source nature of these projects.

And as Nigel points out in his quick start document, this is also helping the WP43S project by testing the software on its target platform. Whichever one you choose in the end (I am having both).
DM42 #40 running C43 | DM41X #50 | various HP models
The earth is flat. It just appears round because it is massive and curves spacetime.
Top

Top left, on the Layout1 (the new template) we currently have on f[Σ+] the function RND, which is short for ROUND and which rounds the real number in X to the current selected display setting say FIX 3, i.e. chops off all the decimals which are not visible in the X register. ROUND also sits both in f[EEX] (DISP) and in f[PARTS] (PARTS), both on f[FN2].

Testing the calculator a lot, I find that I much more often need to round a real number to an integer. Most importantly it converts it to a type long integer as well. This sits on f[3] (PARTS) and FN1.

Both functions fit in there, so neither is a misfit.

Any support for changing RND to IP ??

I did mean IP without rounding. But I agree that ROUNDI would be better, but is too long, but that can easily be shortened to RI then it will be good.

So, the options are then:

RNDI?
DM42 #40 running C43 | DM41X #50 | various HP models
The earth is flat. It just appears round because it is massive and curves spacetime.
Top

By your answer of a suggestion RNDI, I assume you like the idea of a change from round to integer.

RNDI is graphically too long for that location. Even RND is a bit too long next to [a b/c]. I previously changed ROUND to RND to get it to fit, partly because RND is a well known 42S keyword. if I have to change to a NEW keyword which is neither on 42S or 43S, I would prefer to change to something that fits.

See the simulator below:
. 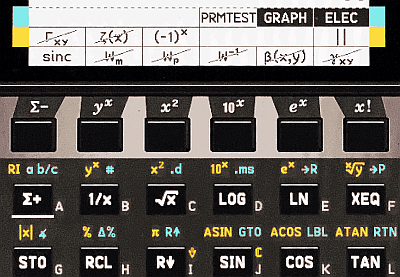