This is correct, and I think you have found an oversight on my part. My DM42 is bricked at the moment, so I was relying on my memory which was that the normal operation of [<-] was to remove one digit at a time from X until empty, not erase all of X at once.

I was also assuming that it would be obvious when X was empty, but as you say, it won't be entirely void - it will contain a zero.

My thinking was that if it could be tested for in code when X was empty, the next single press of [<-] could invoke DROP. Without checking the code, I now assume that there is no test which says that X is empty.

Re. terminology, I think it is a good idea to define some terms, and in this project, this privilege is of course yours.

Just for the sake of understanding you correctly, your fast double click and the double press concepts seem identical, except for the time threshold which discriminates one double click or press, from two consecutive, single presses. Correct?

PS: Don't change anything yet. I suspect that this might be a fart...

Interesting topic and it shows me that it was not discussed to the end.

What is actually missing is CLX.

On the DM42 I am tempted to press the backspace key (<-) as often as necessary to delete the mistyped digit or even the whole input. The trick with the EXIT-key comes up too late in most cases.
But I never have to worry about changing the stack if I repeatedly press the Back key (<-). The worst thing that happens is that X is deleted, which is what I want. So I plead not to automatically convert CLX to DROP.

If I continue to delete the input with this new behaviour on the WP43C, there is now a risk that I will trigger DROP, as I will certainly press the back button (<-) faster than the DROP detection timer is set. So to press the back button (<-) thoughtlessly repeatedly and look somewhere else ( e.g. where the correct number is) is no longer possible. Of course EXIT, back key (<-), that is CLX, is always possible. Difficult.
DM42 SN:00032
Top

I imported the said timer related changes from Dani and re-compiled.

I can report the import seems successful, and the clicks, presses, and double presses, NOPs, etc. etc. seem to work fine.

Further to the earlier discussion I removed the numerous CLSTK commands from the menu, and replaced it with the xth root of y. See below. I included a change of the graphic, and the operation of the keys without menu as well.

I used xth-root-of-y but it is not yet coded by Martin, so I have a temporary RPN type program on that key which does calculate something instead of a struck through name. It checks for square and cube roots and uses the dedicated functions for that if possible, and if not, it does y^(1/x). 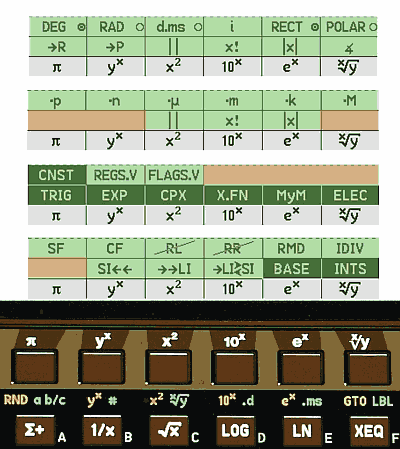 On HOME2 above, I could use the orange blocks, shift the multipliers, and add .f, and .G and .T on the right, which will fill up the orange blocks.
On HOME4 above, One open space, and RL and RR are still bothering me for general use, as SL and SR probably are better, but then, that is just 2x or 2/.


If Dani could do a Windows compile for us, I can do a simulator and DM42 image release tomorrow.


About the CLR discussion: My feeling is as follows:

1. I agree with Dani that sometimes thoughtlessly CLR can be pressed twice or more. In this case, it would cause dropping of a value that we are not used to for 30 years.

I do not want to convert CLX to DROP, but I am willing to add a setting in CFG, "[<-] does DROP" if someone wants it. Say if it is wanted.

2. In my last compile, I did not change the DROP timer, therefore thoughtless pressing of CLR can be done as long as it is not faster than twice per second, in which case it will DROP. Note that it has been doing that for 6 months already.

My thinking was that if it could be tested for in code when X was empty,

For this proposal of CLX, then repeated DROP: zero checking not needed as the code already handles backspacing separate from CLX. So that means I don’t need to check for zero. I can ignore backspacing. I could just check the last operation: if it was not CLSTK, then do CLX, else do CLSTK.

For clarity, the offer in my last post to add an optional setting:"[<-] does DROP" is not the same as the explanation above and excludes CLX. If the operation with CLX first is rather needed I can do the setting for that.


Just for the sake of understanding you correctly, your fast double click and the double press concepts seem identical, except for the time threshold which discriminates one double click or press, from two consecutive, single presses. Correct?

I think the CLR / DROP discussion can be put to rest.

The lack of symmetry I felt in the first place vs. the [ENTER] key does serve well as a safety measure against undesired consequences by thoughtlessly pressing [<-] too many times, which is as correctly pointed out something that users prone to said pressing have been relying on for decades.

Sorry guys, that was thoughtless of me. I'll file it under brainfarts.

What I like about the discussion, is that it provoked thoughts and discussion of how it actually works and challenged if it should change.

Jaymos wrote: ↑
Mon Feb 17, 2020 8:25 am
What I like about the discussion, is that it provoked thoughts and discussion of how it actually works and challenged if it should change.

And THAT is something I value highly, and one of the reasons I really enjoy this thread.
DM42 #40 running WP43C | DM41X #50
The earth is flat. It just appears round because it is massive and curves spacetime.
Top

Jaymos wrote: ↑
Mon Feb 17, 2020 8:25 am
.. unless Dani sees this post in time to change the time constant in the Windows simulator compile that he is doing today.


I think my academic problem with unintentional triggering of DROP will be solved with an additional timeout, that during the transition from backspace key (<-) to CLX the DROP functionality is disabled for x ms (and instantly enabled, if ANYKEY is pressed). But it hasn't bothered since 6 months, so there is no reason to solve this immediately.
DM42 SN:00032
Top

This update reflects the discussions over the last week on this forum, i.e. pp. 72-75.

Note this includes an under the hood major timer update, whereby every time dependant feature added to 43C were disconnected from the program cycle counter and re-connected to the 8 new elapsed time internal timers.

On the last changes discussed today, this compile missed the discussion of the [<-] DROP time shortening and it is the same as it's been for 6 months, i.e. 500 ms.

Windows Simulator rev 2020-02-17.
Note the simulator files include a new image with theCLSTK on F6 replaced with x-th-root-y.

The differences document has not received an update as yet and remains as per last weeks publication, rev 047.

I have now - hopefully with lasting success - unbricked my DM42 back into a DM42.

Jaymos or Dani, would either of you care to share with me how you load the 43C image onto your DM42 (so that if I brick it back again, I have somebody to blame)?