Walter wrote: ↑
Tue Jan 01, 2019 10:56 pm
... feel free to post whatever wishlists you may have. I simply try to tell what looks viable to me within the (physical, economical, etc.) boundary conditions given. If you don't concur, please try to convince me. And if you don't succeed, try harder.

And if you have any questions whatsoever, please don't hesitate to ask. And if I misunderstood your questions or didn't get your points, keep asking.

The worst thing that can happen to you is I've to tell you that your issue was discussed earlier already.

Since the 43S is more than 7 years old, quite many topics were discussed earlier already (BTW, the respective thread is full of suggestions from the community being accepted - thanks to all contributors!). This may be frustrating for folks hopping on the bandwagon some 7 months ago. If those try taking control of the 43S project at this stage (you could call it hijacking) I won't allow that: it's our baby after all. Thus there's a 43C now. Different people, different preferences => different projects.
DM42 SN: 00041 --- Follower of Platon.

It's not that difficult.

I on my part never had and never have any intention of kidnapping anyone's project. But I also don't understand at all that one could and can get this impression. But now the reactions are a bit clearer to me. Even though I still don't really understand them.

And this is a good thing.

I would still ask everyone to stop blaming the WP43C team for working their variants instead of helping to bring up the basic code base of the WP43S. I still feel the reluctant to accept contributions from the 'parasites'.
DM42 SN:00032
Top

I feel compelled to voice my concern that the 43C team may be getting undue credit for the amount of activity in this thread. Might I suggest that those of you who are not really interested in bringing the 43C project forward create your own thread for your discussions?
DM42 SN:00040 | The earth is flat. It just appears round because it is massive and curves spacetime.
Top

Progress to report is that:
HOME menu: questions at this stage: Layout: questions: http://cocoon-creations.com/download/WP43S_WP43C.JPG

As previously suggested fixed HOME keys introduced about the usage of the FN keys when no menus are present and on the white marked FN keys. I added the white text above the function keys to the template, and I re-arranged the HOME menus to cycle through 5 screens. The primary (bottom) row and the g-shifted (top) row always remaining fixed and the same in all menus. The only rows changing would be those in he central (f-shifted) rows, marked in green below:

The HOME screen's bottom function keys line up with the white row and the f-shifted top row function of the DM42 / HP42S.


The changes to the HOME menu sequence can be summarised:
Top Row: Bottom Row: Middle Row:


Notable changes made
since the last progress report on 2020-01-13 (more details are in the new last section of the differences document.).

ADDED some temporary sample data in registers 10 through 20. This is to have specific useful numbers available for testing.: 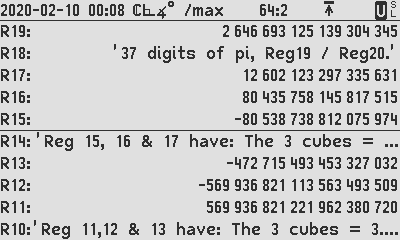 Amazing progress Jaymos (and Dani, et. al.), and I must say that's a bewildering document (in a good way).

Keep up the good work! This has come a lot further than I (and probably you) imagined at the beginning.
--bob p

I can't explain why exactly, but it's enough for me to have MODES and DISP on (f) keys, I wouldn't go looking for these menus in another menu.


I integrated the new DMCP3.17 development files. Seems to work. In my last commit on Gitlab.

Re. the home menus: I get your point about muscle memory, and a static unshifted row makes sense to me.

I would like to pose the question whether the upper row needs to be static. I notice that the g-shifted options are not always relevant to the "theme" of the home menu page, somewhat weakening the case for them (in my mind). Might this real estate be put to more interesting use?

I do like the concept of pageable home menus. It reminds me of 41-style overlays, but presumably with much less hassle.
Last edited by H2X on Thu Feb 13, 2020 9:44 am, edited 2 times in total.
DM42 SN:00040 | The earth is flat. It just appears round because it is massive and curves spacetime.
Top

Good idea. i think you are right - maybe it is too static now. I will give it some more thought.

I have been struggling with keeping a theme restricted to only the 6 f[FN] keys. Liberating the 6 g[FN] keys per theme will help if there now is 12.

12 may be enough to make contained themes for ‘normal’ circumstances.

Ideas for contained HOME screens with the 12 slots each are welcome.

I foresee then the primary line as is and

HOME2 does not seem to need the trig/cpx modes on g. Maybe this group needs the SI multipliers, ||, x!, |x| and blanks for now.

HOME3 seems unnecessary as all display modes are only as far away as f[DISP]. unless we fill g[FN] with sensibly themed things, it can be killed.

HOME4 can get g filled with Some more commonly used menu items, especially knowing layout 42B has no blue labels.

I played around with the HOME menus according to the above suggestions.
Ideas? 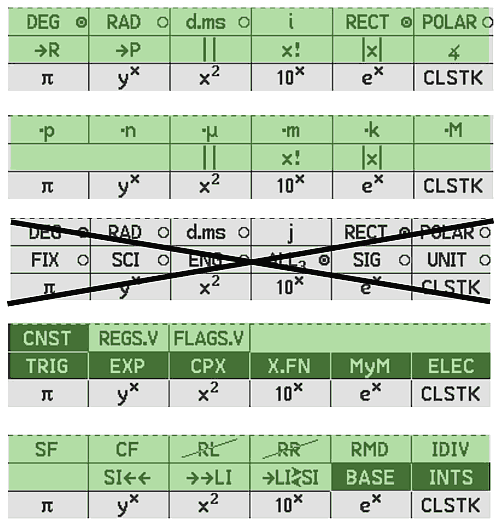