I have a question regarding the graphical representations:

These menu options simply look at the x,y pair graphing values stored in the STAT memory and perform the said discrete calcs for every consecutive sample and plot the result together with the main graph.

It is clear that for a slope point Δy/Δx, the slope value should be placed in between sample points, i.e. mid point, at x1+Δx/2.
My question is where to show the integration point ½Σ(y2-y1)Δx, i.e. at left edge x1, right edge x2, or mid point x1+Δx/2. Currently I do mid-point.
I do not really find references on Wiki of where this is done. Yes, there are ideas on the Riemann Sums on the left, and on the right, but not on the trapezoid sum which I have here, and not where to graph it. I can understand putting it on the right hand side as that would indicate the preceding area, but for graphing it, it probably makes more sense on the mid point, together with the slope value.
Any answers for me?


The below program and graph illustrates it: 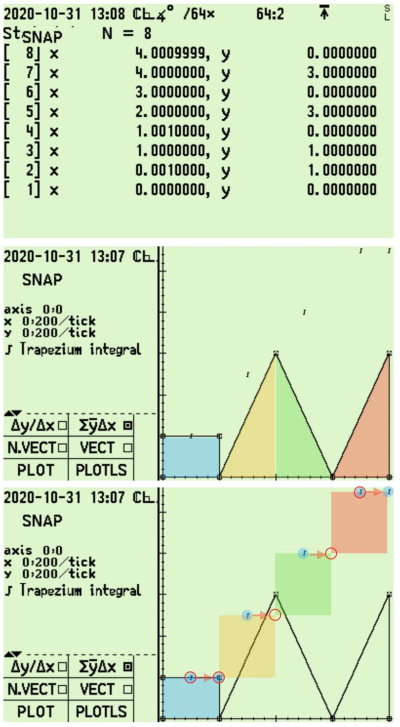 On the graph, the blue dots clearly show the current mid point sum placement, and the red arrows and red circles show the possible moving of these points to the right hand side.
.
. Great job here!
IMO, the placement of the point should be on the right, allowing easier visualisation of the surface calculated by making with the previous one a diagonal of the area box, as your graphics clearly illustrate.
Top

It seems to me that in order to represent these values the choice must be made only as an abscissa value over the whole interval. 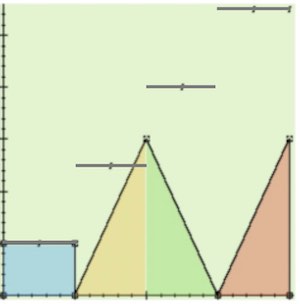 yes! your solution is better!
Top

I implemented the last proposal, maybe consider it and see if it can still improve C43 Simulator for Windows: https://classic43.com/downloads/C43_EMU ... _Rel45.zip
Be sure to delete the binary.bin file from the C43 folder prior to running.
Thanks Dani for the help compiling!

I got my new DM42 and replaced the PCB on the old one. Bottom line: both DM42's are working well. Serial numbers updated in my sig. The new PCB replacing my 18 month old DM42 PCB is now labelled "calcbase3c" whereas it was "calcbase3b". Both PCB's carry the SwissMicros 2017 copyright notice, so the change seems old unless the year did not change.

More specifically: I do (really) like the new DM42 keyboard clicky feel, and the old DM42 is now vastly better with the new PCB and domes supplied by SM as part of the repair/replace. Both my DM42s now have positive click keys and I find it better and preferable to those on the old DM42. Both units exhibit the reported strange double click on the ENTER key, but to me it is not disturbing at all, especially knowing it is simply due to two adjacent clicky new domes underneath the ENTER key. A non-issue. After all, I do not slide-press my ENTER key and if I would, a single press still registers. The double clicky thing does not influence reliable pressing - it is simply a surprising tactile feedback sensation.

I received a report from a user stating that C43 release 43, ran a DM42 battery down overnight. Could anyone experiencing power related issues on either C43 or WP43S please speak up? If any, please report the C43 release version number, also the DMCP version. Under investigation ... but like any investigation, we need some evidence on when what happens.

This week I have the following changes:

Mostly my own graph module improvements due to no hardware testing being available for me. This included PLOT menu changes, integral sums and slope graphs, I am not repeating the previous details posted. The menu structure below, now includes DEMO1-6 data as can be seen. I am pretty satisfied with the outcome of this module and I will probably add to it again once the WP43S RPN formulas can work. Currently the graphing can be used to visualise STAT Σ+ input, either manually entered, or entered by program, which is how I generate the various graphs previously posted. When named RPN programs become available on WP43S, I intend adding a sub menu to plot multiple named RPN (formula) graphs (Y), within stated X ranges.

In this release simulator has some extra info on the console. We may have forgotten to switch off the debugging info. No detriment to use the simulator like this, but I'll see how to make it less ... the reality is, the real verbose mode is already switched off ... 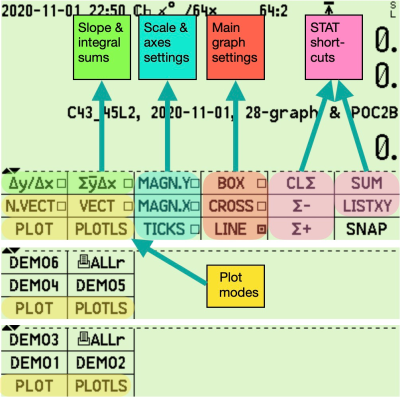 For integration, why not draw the trapezoids? Failing that, the midpoint seems like a reasonable option. It could be misleading since you'll be displaying a rectangle but computing a trapezoid. I.e. the height of the rectangle bears little relationship to the value of the function at the midpoint.

For differentiation, there are numeric methods for estimating the slope at the end points. For example here. There are higher order methods which are often more accurate and since you're plotting the values, the function will have been evaluated at several equally spaced points already -- i.e. they will be very quick to compute.

pauli wrote: ↑
Mon Nov 02, 2020 1:00 pm
For integration, why not draw the trapezoids? Failing that, the midpoint seems like a reasonable option. It could be misleading since you'll be displaying a rectangle but computing a trapezoid. I.e. the height of the rectangle bears little relationship to the value of the function at the midpoint.


Thank you for the answer and link.

On the last published example, I am plotting the horizontal line through the midpoint, not a rectangle. You might be confusing the coloured rectangles which I placed with PowerPoint.

I find it difficult to imagine how to draw the trapezoid, as only for the first interval, the trapezoid may resemble what you expect, i.e. to show the slither of area.

The problem is when you calculate the y sum for each x sample, each successive term in the sum will take you further away from the previous sum value for positive sample values. So the problem becomes where would you place the trapezoids because they can not be drawn on the source data, which already is drawn as point to point lines, i.e. the trapezoids will coincide and not be visible. Each trapezoid should maybe start on the edge of the previous one, and that may look ugly for negative sample values.

Any sketch of what could be useful maybe?


For differentiation, there are numeric methods for estimating the slope at the end points. For example here. There are higher order methods which are often more accurate and since you're plotting the values, the function will have been evaluated at several equally spaced points already -- i.e. they will be very quick to compute.

I understand the problem now: you're trying to display the cumulative integral.
The horizontal line segments seem like a reasonable idea as might joining the corners of the squares in this image. The integral and the function should only interfere in a small number of places.

I tried some options, and found that two rectangles added, the first showing the previous cumulative value, as well as another stacked rectangle showing the increment. And a diagonal line. I find that intuitive.

It is a lot of lines though. Question is, is this more useful?

If it seems useful, I can add an option button for that as in some cases it may be a lot of clutter, but it does make a good graph though.
.