The third row does not have to be dynamic A B C ... because in Hex mode, the top row of keys (underneath the function keys) (labelled as A .. F) already work as hex digits A..F in HEX mode.

FB already is flip bit and cannot change. So I propose FBYTE.
For symmetry I would propose FWORD for FW.
With "signed" I assume you mean 2's complement.

So my rendition of your menu would be:

The POC for the second BASE menu layout.

FWORD and FBYTE need specification before I can attempt to code it.
. 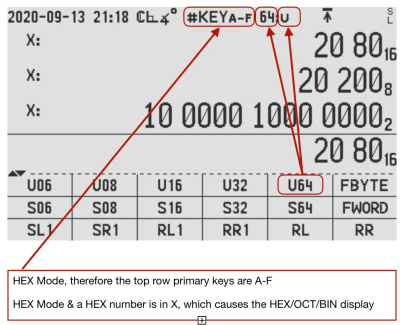 .
.
Further to the discussions this afternoon, I changed FB01-FB64 to be FB00-FB63, counting from 0.
Most people might indeed count from 1, but a subset of people, including hardware people like myself, mostly count from 0.
This is now different from the 43S; well, I can't stop hoping the bit counting will change.
. 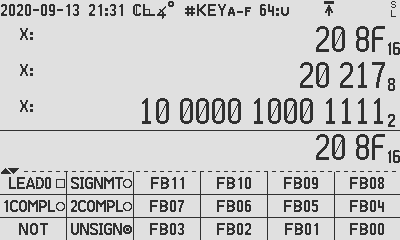 .
.
Here compiled versions of my release 39. Thanks Dani for the sim compile as always.

DM42: once loaded and started, remember to f[CLEAR] g[RESET].
DM42: I rolled back to the DMCP firmware requirement of 3.18 which comes with the DM42 software. This means the newest DMCP 3.19 need not be installed prior to C43.
DM42: Remember to copy the PROGRAMS folder from the zip file to the calculator flash drive. It can work without, but it is nice to have the demo programs on board.

To orientate you, here are a few instructions to demo two things: An update is available to C43.

This week's changes include::

1. Updated C43 to the small changes made to 43S, which include some compiler upgrades and Martin added some stuff like LnBeta which John wrote, and some mods to Re, Im & Arg which I wrote. This stuff then updates to the C43 as well.

2. On C43 I re-vamped the interpreter of the XEQM text code to be less finicky about text formatting. Still a work in progress. In this release I dropped the need to write numbers in quotes. Without the quotes there is an improvement in readability as the code resembles clear text, see example below and note the insert text cursor at the D of DSZ:

By the way, the above code file is located on the flash drive in /PROGRAMS/, and can by typed in free form RPN, spacing and comments added on PC. This can be edited or written on the calculator in the text editor. When a file made on PC is loaded into into the calculator, it is loaded without carriage returns, line feeds and comments, to respect the relatively small amount of memory and the lines available on screen. See in the picture below, the same file was loaded and edited in-calculator. Cursor buttons up/dn work, as well as softmenu cursors < and >. 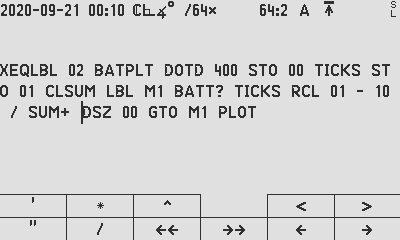 
3. I added another longpress shortcut: Longpress EXIT is a shortcut to clear both the HEX mode if active, and simultaneously to clear a numeric input which you don't want anymore. There isn't another way but to repeatedly press backspace. Holding your thumb on EXIT in is an intuitive way to clear something that seems 'stuck' like the HEX mode if you forgot how to clear it, or you are trying to clear the input buffer.

4. Further to our discussion here last week, and after further discussions on the Gitlab development group, the WP43S team renumbered the flag bit counter to 0 to 63, representing the bits of a 64 bit word. Great, thank you.


RAPo, any progress on the details of your byte and word swapping functions in your BASE menu proposal??

A question from elsewhere, copied here since it is a question with a good answer I think:


Using the latest (v40) C43 program, I noticed that Undo and CLR are reversed (Undo works with g, rather than f as it should, and CLR menu is accessed with f).

On my Mac simulator and on my DM42 the keys work correctly. Unless there is a bug in the Windows Simulator which I cannot test on my Mac, the answer probably lies in the following discrepancy:

The reason is probably because we distribute two key layouts, you will notice the 'L2' in the DM42 firmware file, i.e. C43_40L2.zip.

L2 is the version made for native DM42 key compatibility.

L1 currently is on the simulator only, and is also our ‘preferred’ layout which is getting onto our metal C43 key template. There on L1, UNDO is on f, because we believe it is more useful to have the UNDO on the easy single press key. When our key template is available, we will make available both L1 and L2 versions for the DM42.

L2 is the more DM42 compatible layout, i.e. the C43 aligns with the DM42 existing yellow labels so that you do not need a template. The DM42 has CLEAR on the yellow label, therefore C43 uses CLEAR to call the CLR menu, and Undo must sit on g. That is reversed from L1.

We did spend and inordinate amount of time on this group a year ago to really find the optimum key layouts and I think the L1 layout is a real gem.

Interesting fact 1: you can change the keys around. Go the g[1] to the KEYS menu, and choose either DM42 to use L2, or C43 to use L1. This swap works on either simulator or hardware.

Interesting fact 2: you can even select WP43S too, which will line the keys up with the main project's hardware calculators for when they will be available.

This looks nice if you change it around on the simulator, because the labels follow the selection in real time.


Added to the BASE menu functionality:

- Added selectable display mode for 1-3 lines of X display for short integers. I made the calculator default to two lines, leaving 2 lines for the stack X and Y. That can change in DISP Up f[FN3]. I found that I prefer two lines of the stack, but you can change that. See the grey image below, with two stack items, and two X register duplications on top.

- Added RAPo’s little/big endian conversions to his proposed BASE screen (SWAP.B & SWAP.W). We hope this is what you intended.

- Updated to the bugfixes done by Martin for 43S, including the HP16C-like handling of integer memories.

- Changed the default names for the 18 user defined XEQM buttons from XEQM01..18 to X1..X18 instead. See in the green image below.

- Added a break out keypress, to exit from an endless (or long) loop in XEQM RPN code. Any key pressed will abort the currently running program.

- Added a TEST program on XEQM g[FN6] for fun, which plays with a ‘forensic’ test similar to the traditional forensic test. See below.
. 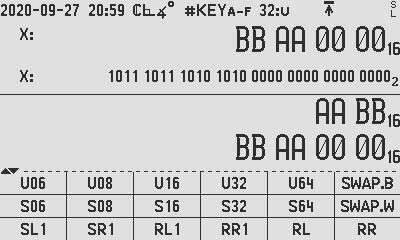 Illustration of a big/little endian swap in the sample 32-bit word, this example done with SWAP.Bytes
.
Other small changes:

The 43S ‘+’ operator only works to add a number X to a string Y, and I added functionality on the C43 to concatenate a string in X to a number in Y. This is used to build strings in program output, see in the forensics program below.

As mentioned above, I played with the old ‘forensic’ test mentioned in footnote 69 of Walter’s Reference Manual on p164, but I amplified it significantly by adding more functions without repeats. I added as much of the on-keyboard math functions to see how much the accuracy of the C43 and hence the WP43S will suffer due to repeated transcendentals and rounding. I do bear in mind it is a nonsensical equation, but it has been calculated millions of times I suppose, since Mike Sebastian coined the term here https://www.rskey.org/~mwsebastian/misc ... ensics.htm.

To be fair, I tried to ‘break’ the accuracy due to massive propagation of rounding and numeric errors. But it does not really successfully ‘break’ the 43, as the result shows below. You will see the formula deflects symmetrically after the cuberoot function and then reverses in sequence, the inverse functions for the 13 functions performed. (The PI in there is a 34 digit constant in the constants table). 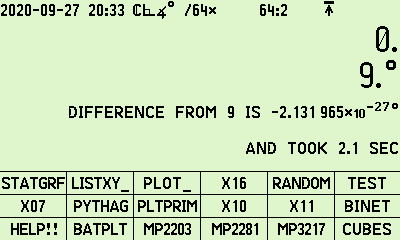 The BASE menu which kept us busy for a few weeks now was summarised on a few pages. See the two page draft BASE menu writeup:

C43 Simulator for Windows: https://classic43.com/downloads/C43_EMU ... _Rel42.zip
Be sure to delete the binary.bin file from the C43 folder prior to running.
Thanks Dani for the help compiling!

C43 DM42 software image file: https://classic43.com/downloads/C43_42L2.zip
Be sure to do CLR/RESET after resetting the first time.
The DM42 firmware update now bundles DMCP3.20 with their software. The C43 firmware requirement is DM42 DMCP firmware 3.18 which was the previous packaged DM42 firmware.


Changes made:
* Subtle improvements/changes to the code doing FN key double tap detection on DM42 hardware. Try it out and see if it works better.

* The FN key double tap setting G2TAP default was changed to be activated at restart.

This means you can long press STO to get COMPLEX, and keep it pressed in, to reach |x| then release it, etc.
This also means that for the first 4 rows including function keys, single finger operation is possible, i.e. just keeping the button in, would cycle from say Σ+ to Σ- to ab/c to NOP.

* Neatened up some of the sample XEQM programs.

* Added long press EXIT to pop all menus, and clear BASE mode.

Temporary additions:
In order to ease testing, the following temporary indications were added: These are temporary tests for comments, not a permanent features.

* Version info defaulting to register Y for a testing period. I am trying this out. It helps if we have multiple C43 versions on flash. Does it work for you?

* Single/Double/Triple tap indication in the top right in the status bar of the hardware version on DM42. Try it out and comment on the click detection success.


Keyboard change:
for the current DM42 compatible (the version that requires no special template, i.e. Layout 42):
I use it a lot and I missed the symmetry of the RollUp and RollDn which was not offered on this layout. I decided g-shift RCL for the Δ% function was not on the HP42S keys layout; it is on the FIN menu anyway and it was also stuck right in the middle between complex size g[STO] and complex angle g[RollDn]. My solution for all these issues was to remove Δ%, shift the complex angle one left to g[RCL] to be next to the complex functions, and add RollUp on the g-function of Roll-Dn. 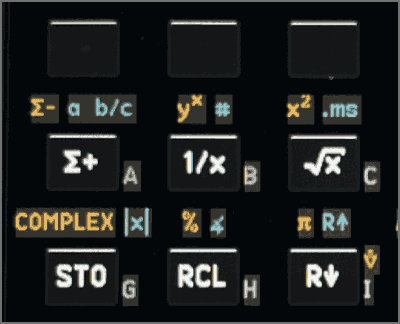