Fixed, thank you.
Silly mistake as most are ...

This one is part of a larger question: What bases should we display in SHOW. Currently, for this example, we are more than 32 bit, and therefore my lookup determines that we will display top line:#16, 2nd line: #10 running over to 3rd line, and 4th line #8.

The mistake here is that base 8 does not fit. So the solution is to not display base 8 if there is more than 54 bits.

I can easily change that, but at the same time, have a look at the other decisions to display bases in SHOW. There may be better combinations.


The lookup table currently works as follows for the example stated, look at the bottom row, base 16, right hand group, meaning more than 54 bits:
"Top" of course is the top row and 2,3 and 4 are the 2nd 3rd and 4th rows. 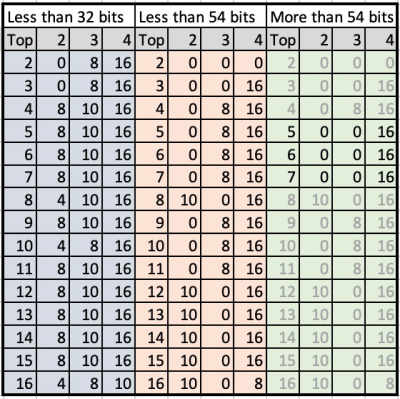 The mistake here is that base 8 does not fit. So the solution is to not display base 8 if there is more than 54 bits.


This fixes the problem of using [CC] in NIM state to create a complex number, but the stack lift should'nt be disabled outside of NIM state, when it is used to convert back and forth between a complex number and it's two components (WP43S Owner's Manual, p. 160-161).
Philippe Martens
Elec Eng, Software Architect
[HP41C, DM41X, DM42]
Top

Yes, I did exactly that. I made an exception for ITM_RCL. I seem to recall that I checked the LASTx as well, but apparently not. I will re-look at that. If only a few, exceptions can work the same way, otherwise I need to figure another way. The eRPN is a real challenge to implement trying to not change too much from the 43S code.

Something bugs me !
[ENTER^] handling in WP43S and in C43 without [eRPN] is something like

With [eRPN], should'nt it just become (without any other change anywhere) ?

What am I missing ?

EDIT:
I've built a new version based on that hypothesis (essentially reverting all the code relating to eRPN (except UI), and implementing the else above).

It seems to work quite well. I'll do quite more extensive checks.

Next question will probably be, how do I send you my code ?
Philippe Martens
Elec Eng, Software Architect
[HP41C, DM41X, DM42]
Top

I was about to suggest that you try a new version from scratch, then I saw that you did an edit.

Let me first jump back 3 steps, FYI, after eRPN was initially done, Martin changed around the 43S system about a year ago which I then fixed, then Benjamin did some more serious changes on the 43S affecting eRPN earlier this year, which I fixed again. Those were major changes. There are constantly small things changing. These ‘fixes’ though have covered all the bases, and in fact I think it was not properly done. So from that point of view it really needs an overhaul now.

I am very happy you try from scratch. As said, it is really needed.

Code mods: working directly on Gitlab using either command line or a client, works very effectively on the same project from different sides of the globe. We do it all the time. My suggestion is to follow the instructions to build a dev system, and that includes connecting via Gitlab.https://gitlab.com/Over_score/wp43s/-/wikis/Build-setup, and I found more instructions from Google of how to make a branch, and push the changed code back into your new branch, then I merge your code back into the main project.

Until that works, you are welcome to zip the src folder and email to me and I will load it. Very important: You have to tell me exactly which SHA your mods are based on otherwise there will be clashes. Send to jaymos at classic43 dot com.

I've now re-executed almost all examples in the Owner's Manual up to page 130, both with and without [eRPN] enabled.

Thank you for the testing!

I can't access the repository at all with SSH:
> git clone git@gitlab.com:Jaymos/wp43c.git ./wp43c --progress
Cloning into './wp43c'...
git@gitlab.com: Permission denied (publickey,keyboard-interactive).
fatal: Could not read from remote repository.

Nor can I push to it with HTTPS:
> git push -u origin C43-106g-PHM-eRPN
remote: You are not allowed to push code to this project.
fatal: unable to access 'https://gitlab.com/Jaymos/wp43c.git/': The requested URL returned error: 403

I guess you have to give some authorization to my account (be-philippe).
Philippe Martens
Elec Eng, Software Architect
[HP41C, DM41X, DM42]
Top
Post Reply
1324 posts