Good to see it was possible to download and compile C43.
And even better to see help compiling arrive when needed.

You can play with the latest equation editor and solvers. WP43S added the equation editor, but there are some design decisions I must still make, based on feedback. The 43S solver works. The issue on lower case or upper case characters for the function names are still to be considered. Currently 43S has sin cos and tan. C43 keys are based on the DM42, which has caps, i.e. SIN COS and TAN. Additionally, I find the typing and changing between numeric/greek/upper case and lower case restrictive. The complete C43 keyboard already works way different from the 43S keyboard, but I do not think it is smooth enough yet.

My latest thinking is that the greek letters (which are all on a softmenu) are in the way on the keyboard. I have already removed the greek letters from the template long ago to remove the keyboard clutter, but left the keys active as hidden shortcuts. But that seems in the way now. There are three sets on the keys, i.e. numeric, caps, lower case, and three shift modes, unshifted, f and g, and two sets of locks: caps on/off, num/on off. You can guess where I am going: as simple as possible but no simpler.

I think the system needs remain more or less as it is now, but with the greek key shifts removed altogether, typing in alpha and equation editor modes may be smoother. The capslock/numlock indicator would remain as is, sans the greek symbol on the indicator.

Some other things are incomplete, such as the catalogue, which I added to the equation entry menu tonight. It will work well, but needs a lot of tweaking first. Rather not use it, it is incomplete in the equation mode. But it is a progress release. I had to trim the DM42 releases a lot to fit into the memory, which is getting fuller and fuller ... Removed for now are: USER keys, test registers 10-20, STAT demos, flag, register and font browsers, Standard extra 43S math: SLVQ, PRIME, BESSEL, ELLIPTIC, ZETA, BETA, ORTHO_POLY. All culled functions are compiled into the Windows version though.

Some notes on the equations and solvers: 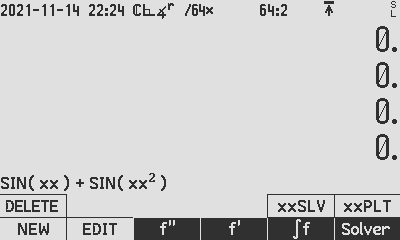 8. EXIT will leave you in the C43 plot menu with many graph options. Another EXIT to return to the solver.
9. Try my prototype C43 solver for real/complex roots. Press "[6] [xxSLV]" where 6 is the guess. This function has plenty roots, as can be seen in the graph. I am leaving it in to compare with the 43S solver, but the 43S solver will probably end up a lot faster, sleaker and more efficient than mine, so mine will probably be retired after comparisons have been done.


Another example formula using my solver: I do like the text though. The text is actually strings on the stack, and not a fleeting message which disappears after you press something. Note top right, it quotes the guess provided, i.e. Xo=-1 in this case. 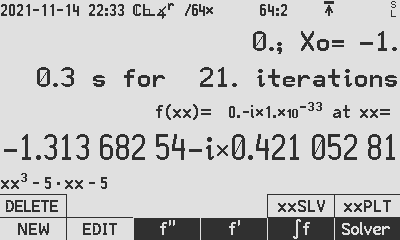