Thanks for the explanation, Jaymos. I have loaded the 105 and will try it.

In the meantime, though, there is a minor problem. Newly loaded your software and fresh from a reset, I did Yellow-+ (standard DM42 key names), and got the attached error. 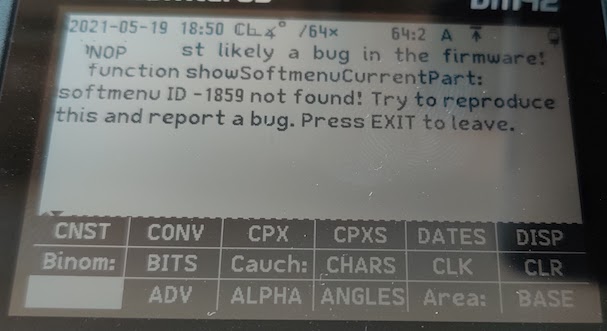 Feedback: the bug was fixed and ready on Saturday, but we have compile challenges to fit the pgm file into the DM42 without using a 2nd file (QSPI).

Of course all fits into the DM42 if I make use of the QSPI file, but as recently discussed on the other thread, I do not want to have that complication. I don’t want to go there.

I probably have to cut some of the experimental code such as non-stats function graphing, root finder, etc. and also the keyboard replica (which includes USER allocations in a menu, but takes up lots of space). That means the simulator would contain all code, but the DM42 would have some missing.

Interesting. I imagine a "build and automatically split into PGM and QSPI" would be a nice improvement to the toolchain.

I don't know enough about the architecture to help - but I did download the datasheet and manuals for the STM chip last week on the random thought that maybe I could get a Lisp running on the calculator. LOL

PS: Back in the day when I did low-level programming there were compiler optimizations to optimize for code size instead of speed (sometimes it did both, when smaller code size could make loops fit into L1 cache). Maybe see if your toolchain can reduce the compiled size somehow, or disable code-size-increasing optimizations (e.g., loop unrolling)?
DM42 SN: 00085, DM41X SN: 00517, DM41L SN: 00391
HP-01; HP-41C, CV, CX, CL, CY; many others
Top

I finally got a (reduced code) C43 image that runs on the DM42 without the additional QSPI complication. That would be version 106d.

In simple terms, sans-QSPI means you can have various versions of each of C43, DM42 and WP34S/C (Nigel's) on your DM42. (Normal heads-up - make sure you backup, just in case.)

I had to cut some functions to be able to make it work, and these are in the defines.h file and if you are adventurous you can play with these options, or even compile a full version which will need QSPI memory. To use QSPI is no train smash, but using QSPI prevents you from running various models on the same DM42 unit at the same time. (Using it does take time to get used to the sequence of replacing the files which is important).

The following functions were removed from C43 to make it fit. We will keep optimizing it to get more of the removed functions back. Of course no functions were removed from the Windows simulator in the zip file. All normal functions work.
The bug that was reported relating to the access of the CAT was fixed, and just for good measure that menu is shown below. Note the little line under the "A" in red, which is a C43 special which indicates the alpha selection is active. This 43S mode times out after about 3 seconds allowing further search letters to be typed within this window. See below, an arbitrary screen dump of the CAT'FUNC menu:
. 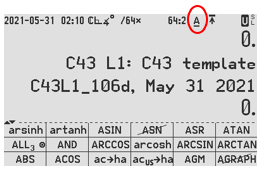 
.
Then, there was mention in the other thread of SNAP not being present on C43. I added it as an option for a NORMAL made key function replacement on Sigma+. This functionality is also here for some time already, but a quick re-cap below for general interest. I never have SNAP on here because shift-EEX works as screen dump. It may be useful on a key in the simulator though.

To test the CAT'MENU function (to continue from the above bug) I used CAT to get to KEYS. Of course g[1] is a lot easier to get to KEYS! Either way, the illustration below shows how to get the SNAP function on the Sigma+ DM42 key:
. 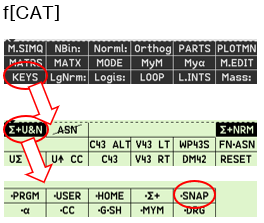 .
Further to the current message on the other thread regarding the evil long presses -- it is not that hard to have long presses and double presses for that matter, become part of muscle memory; it sort of automatically becomes part of the rhythm especially since C43 has a single shift button as per DM42 design.

I cannot work a calculator without a complicated backspace button anymore, doing all of the following: backspace, CLX, DROP, CLSTK and CLA on one button. Then there is also EXITCLR on EXIT. And cycling the shifts and HOME on the yellow button. Then on each of the math buttons both long and double presses. And the thing is if you don't like it, you don't use it. And if you accidentally hold it in too long - well just keep holding it to NOP. And if you really don't like the double presses, well, you can switch (some of) them off. But I never do - it sort of grew on me!