Does anyone know nautilus?

All I can say is that nautilus has not logged on to the Swiss Micros forum since August last year. All of his posts on this forum have been deleted, too.

My guess is that he has lost interest in this forum or he has had to step back for other, personal reasons.
There are only 10 kinds of people in the world: those who understand binary and those who do not.
Top

Still alive and well in Canada!
My 'nautilus' profile has been deleted ... sorry for any confusion. Please try 'inautilus' going forward. Thank you.
Also, if you prefer, inautilus.design@gmail.com will work as well.

For open discussion for all, calculator layout changes:

I have made some unreleased changes over the last few weeks, and I would like an open to all discussion around these.

1. I changed the primary function keys of 3 of the 5 HOME menus to have the exactly the same primary FN keys. This is to reduce changes from one screen to another, in an attempt to better serve muscle memory.

2. I changed the primary function keys of the HOME menus to reflect the f-shifted math keys on the top DM42 row. I added 2 more functions to FN1 and F6, i.e. pi and CLSTK. That means the top FN key row of the 3 x HOME menus now have the normally shifted functions y^x, x^2, 10^x & e^x mirrored from the f-shifted keys below them.

3. I changed the FN key handling in the 43C, to recognise these same keys also if no menu is showing. That means when no softmenus are shown, the FN keys mirror the 4 math keys of the top row f-shifted.

I really wanted to use the extra keys that the DM42 body offers, and one of the little issues for me on my HP42S used to be the lack of direct x^2 and y^x buttons. This idea solved that problem.

4. I changed the key template to show these keys above the FN keys in white. The items mark the use of the FN keys for when no menu is present, in the same way that the HP67 (below), HP65 and even WP34S mark their alternative functions of the function keys in white: 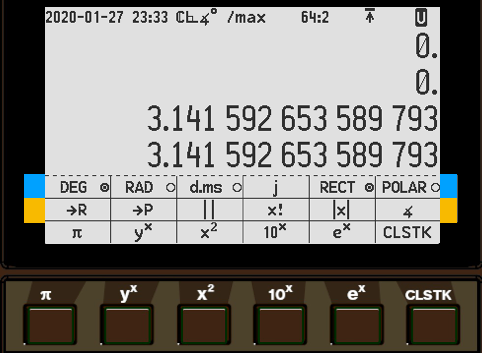 NOT YET RELEASED LAYOUT

I also optimised the HOME menu allocations on the 5 HOME menus to have fewer items change between menu screens, and more relevant items together, so that the user will feel more intuitively in control of his calculator.


Changes made to the HOME menus:

i. GRAD removed from HOME menu, and "i" added. The HOME menu now only has DEG/GRAD/d.ms. Maybe it is just because of my engineering background, but I don't know people who use GRAD, and I needed that real estate in the HOME menu for there things. If still needed, it remains in MODE with MULpi and can be chosen there.

ii. CPX removed. It wastes space in the HOME menu and is easily found on g[x<>y].

iii. x! moved to f[FN4] of HOME1. x! really is not used enough to deserve a spot on the primaries.

iv. Euler's e constant is removed from he primaries of FN. 1 e^x is easy enough especially now that e^x is on FN5 primary.

v. j is removed from f[] to g[] in an attempt to keep the complex and math types together.

vii. I am considering to change INFO in HOME4 to CFG, which otherwise is difficult to get too.

viii. Walter dropped key access for the d/c fractional mode on the g[E+] key (presumably in favour of [d/c] in a menu). I think this is a good idea, as I do not see where I would use [d/c]. The [a b/c] mode, yes, but not [d/c]. If I move [d/c] to the appropriate menu, then we have a prime opening on g[E+] available. Any ideas for worthy functions for this location?.

Still alive and well in Canada!
My 'nautilus' profile has been deleted ... sorry for any confusion. Please try 'inautilus' going forward. Thank you.
Also, if you prefer, inautilus.design@gmail.com will work as well.

Glad to hear you are alive and kicking. I went to check back, the reason for the communication problem was that I sent you the PM's using your old profile. Not sure why I did use the 'nautilus' name, as all my previous correspondence were all to 'inautilus'. My fault, sorry. Either way, I will forward you my last PM, which is about layout changes I made to the alpha layout back in September.

I contacted you regarding printing of WP43C templates using your design here on my side - I found a local company and a guy who has some ideas regarding template printing, and I want to laser cut and print a few templates on different materials to see how it comes out. As it potentially influences all on this list who may want to eventually get a template for their DM42, I mention it here.

If you have time to help, I would like to see an update to your CAD file of the current template.

Below the latest layout, with red lines where I think changes were made since we last communicated.

Also, I would like to request the vector file, ie a Coreldraw export or the CAD file. 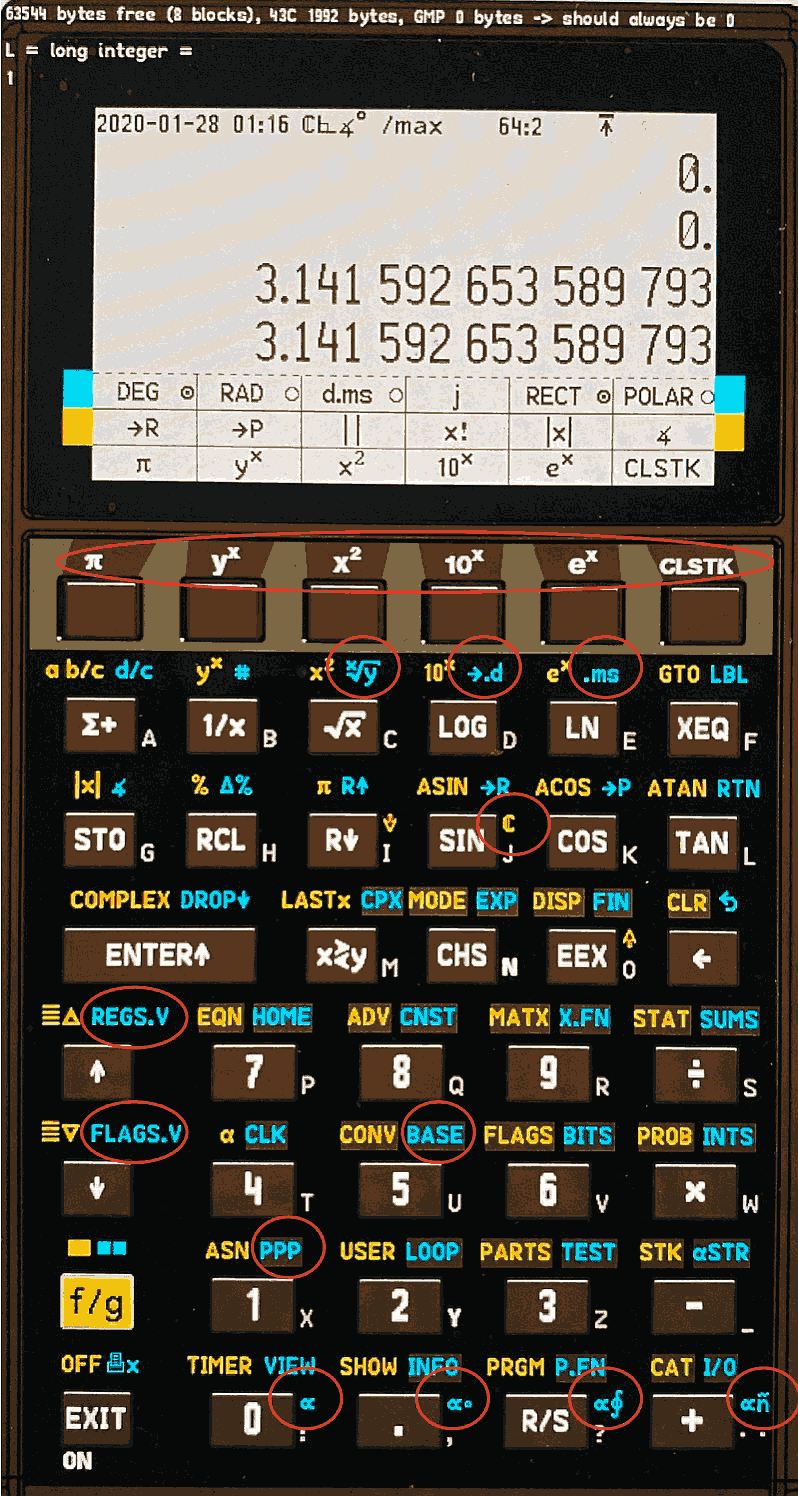 Jaymos wrote: ↑
Tue Jan 28, 2020 12:52 am
I would like comments on:
a. further improvements that I can make
b. whether the changes above would be useful.
c. Any other comments on the layout.


I re-cap and expand on the questions I had in the post above, to be more specific. I will soon make a few DM42 templates, therefore I am re-looking at the layouts. The difference from last year's WP43C keyboard label re-think we had on this forum, is that due to the availability of the simulator and DM42 firmwares, and lots of functions more that are actually working, now there should be practical experience of whether or not the layouts work or not.

Regarding exchange UNDO and CLR my opinion should be clear... Swap!
DM42 SN:00032
Top

Now that things are starting to actually settle out ... with less now in flux ... it looks like a great time resume layout graphics. I should have the current iteration (2020-01-28) ready to go by the weekend.

CLR/UNDO: Any thoughts on this one? Do I just swap it? We had a lot of discussion on this one last year.

Regarding exchange UNDO and CLR my opinion should be clear... Swap!

Thoughts: I do not want to shift # to [d/c] because the CC package in USER has >R>L on this position and in USER mode # will disappear. So, RND is good. Or this can be 3rd root of x. That’s also good.

Now that things are starting to actually settle out ... with less now in flux ... it looks like a great time resume layout graphics. I should have the current iteration (2020-01-28) ready to go by the weekend.