If anyone has any objection to this, may they speak now or be silent forever.

As I said, it is pretty.

Your graphic choices are yours and my template will look different.

But if you want to spend more time tinkering, and you want critical comments, you have to ask for comments - but you asked for objections and I have none of those.

If anyone has any objection to this, may they speak now or be silent forever.

As I said, it is pretty.

Your graphic choices are yours and my template will look different.

But if you want to spend more time tinkering, and you want critical comments, you have to ask for comments - but you asked for objections and I have none of those.

Ok, herewith I solemnly ask for comments, remarks, etc. (you might have noticed I quoted a popular phrase above which knows of objections only; and our previous requests on this forum for comments, error and bug reports had ... hmmh ... very limited success so far; but you're right: never drop hope). So I duck and cover in expectation of a flood of critical comments (well, I leave my diving goggles off - call it experience).

You mention the DM42 … The interesting point is that we did not have chance to influence the DM42 and if we had, those x<>y arrows would have been edited, and the stroke thickness of the white letters beefed up. It seems (to me) that the white strokes is the only part of my DM42 that looks a bit Chinese.

As I said, it is pretty, and pretty good. I think maybe some minimal tinkering is needed to get it to what you want it be. So, as food for thought, my comments which you need to apply to how you want it to be, not how I want it.

About the interesting font choices, the only criticism: I think lg and ln are the only glyphs that show the very curly serifs. IMO, it stands out in a way that it draws attention to it, in the wrong way. I am not criticising a cursive font, but I think these L’s need their protrusions clipped by maybe 30%.

I think the spaces between golds and blues are a bit too recipe like, and with the short labels aligned with the button edges, it shows. It needs balance, i.e. the labels need to be shifted until balance by eye is found. An extreme example is the space between ⍺ and √x.

All the lower case yellow and blue letters, as well as the blue ⍺, √x, and 𝝿 appear a lot smaller than the upper case and digits (like 10). The small x exponent at 10^x is even smaller. The ratio (size of X)/(size of x) of a given font is normally maintained between upper case, lower case and digits. But in this device I think clarity should be more important than the strict rules of the proportions of a font. I would suggest you upsize the smaller letters to be closer to the visual impact of the larger letters. The brain needs only a small variance in shape, while the eyes need bolder and larger letters.

I made an illustration to show the impact of size. I used the default font on my laptop (Neue Haas Grotesque Pro) and with that font choice I am not at all commenting on the font selection (except with lg and ln above). The sole purpose of the image below is to show impact of the same font with varying point sizes and spacing, as tweaked for each individual label within the space around it.
. 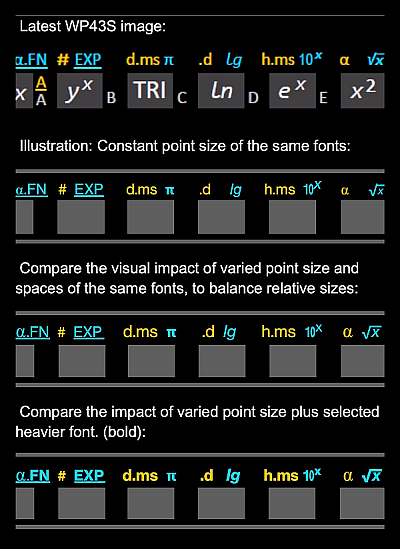 .
Square root x: In the font tool that I think you use to maintain the calculator fonts (Fontcreator), there is a way to import a scanned or otherwise created bitmap and convert that to a vector font. You could try make a sqrtx glyph and edit it in Fontcreator to have a vector glyph, then you won’t have to manually insert a line.

Apart from the division slash which seems a tad long and the said arrows that may need a diet, the large white labels are nicely done. The stroke width of the glyphs are important and I would still look at tweaking:
I do think f and g can be a point size fatter and maybe check and see how it looks if f is positioned a slither lower and g a slither higher. They need not be aligned as if on paper, but stand on their own on their buttons.

Just try these suggestions and see for yourself if it makes a difference. Ignore them all if it doesn't.

One question, which I will take the liberty of interposing here, concerns the proportions of the keys. Is it really intended that the keys will increase in width and especially in height in the dimensions (compared to the DM42) as the last PNG suggests? With the DM41X (Beta) (which I only know from photos) this has not happened yet.
DM42 SN:00032
Top

Walter, you did say that the final result would be close to the image you posted. At some point there will of course be a freeze, but if you would like further feedback it would be interesting to see more examples as you approach that point.

One thought which crossed my mind is that not every detail on the keys or the faceplate needs to be super readable, as we are not going to read it much - once muscle memory kicks in, reading will kick out. From then on, it just needs to be recognizable.

Bottom line: If you do decide to use different sizes, kernings and what not for different fonts / labels, I won't tell anyone. But as said, it looks quite pretty already.
DM42 #40 running WP43C | DM41X #50
The earth is flat. It just appears round because it is massive and curves spacetime.
Top

(Looking out of my shelter: ) Those were just the usual suspects so far... Anybody else?

I mean, my usual procedure for evaluating a keyboard layout should be known. I print a layout in the same length and width as the physical DM42 and use it for comparison. If you put the DM42 and this printout directly next to each other, the changed size of the keys is obvious, you don't even have to use a sliding calliper. For the WP43C it is clear, it will not get a different keyboard.

Well, I've checked the DM42. The cut-outs in the front panel correspond to the dimensions in the last PNG. But the keys themselves are about 1mm narrower in both directions. Hence my impression that the height has changed considerably, as this is proportionally also the case.

But because I'm interested; is it planned to use bigger keys for the WP43S than for the DM42 and DM41X? For the emulator it is of course possible to use a completely different design.
DM42 SN:00032
Top

Dani R. wrote: ↑
Sat Feb 22, 2020 12:36 am
Well, I've checked the DM42. The cut-outs in the front panel correspond to the dimensions in the last PNG. But the keys themselves are about 1mm narrower in both directions. Hence my impression that the height has changed considerably, as this is proportionally also the case.

This leads to a good point: the PNG shared has the button sizes printed as that of the holes in the plate. That is good for viewing the yellows and blues on the available real estate.

To evaluate the whites though, you need to put a second grid on showing the real estate of the printable button. Spacing issues will be shown this way, where you possibly encroach on the edges where printing may not be effective on the curvature of the button. Buttons B, G, H, K and /, and possibly a few more need to be carefully verified. It may be worth determining a virtual no print area away from the calculated edge of the button, maybe 0.3 mm or more, to allow for manufacturing and paint/print machine tolerance.

You are all three right, in principle. Will check the details.
DM42 SN: 00041 Beta
WP 43S running on this device