To build, I like to use Clang, rather than GCC because of some nice tooling that it provides for profiling and debugging. However, C43 uses a gcc-only extension (which WP43S doesn't use): nested functions in C (i.e. void blah() { void meh() {} }). Would you consider a patch to extract those from their outer function?

We discontinued the use of the nested functions, and we also updated the header files with proper external declarations so that there are no such errors. (To be honest I used that in ignorance of the standard!)

The latest revisions (see the ‘latest’ branch) compile on my Windows gcc and Mac clang compilers with only minor warnings.

There seems to be a bug with the display format in the WP43C simulator.
At first I thought the problem was with the constants library, but then I saw that it affects any very big or very small number.
For example Avogadro's number, with SCI₃ or ENG₃, it displays correctly. 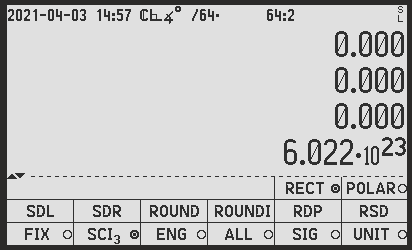 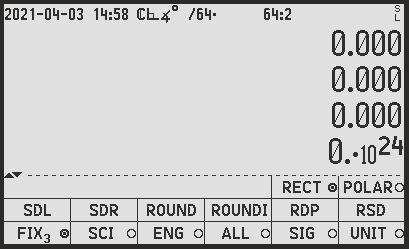 The WP43S does not have this problem.

Found the FIX bug, which was also evident in the SIG mode.
Fixed it in the development branch. Will upload a sim in a few days.
Thanx
. 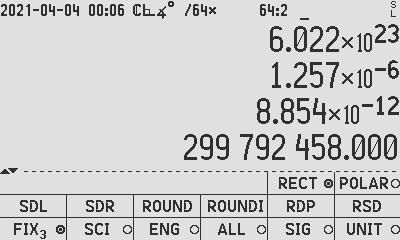 This is great.
Pocket calculators came out in the 1970s. Why, I wonder, has it taken until now for (one) calculator to appear that displays significant figures when this is what is needed for most everyday and engineering tasks?
HP50G HP35s Free42 DM42.
Testing WP43S, C43.
Top

This is great.
Pocket calculators came out in the 1970s. Why, I wonder, has it taken until now for (one) calculator to appear that displays significant figures when this is what is needed for most everyday and engineering tasks?

I loved it from the moment I first saw the hack on the WP34S from Nigel(UK). And some changes by Bit, here.

Jaymos wrote: ↑
Sat Apr 10, 2021 3:00 pm
Googling it now to find the Bit and Nigel references to quote, I found my own document, which I have forgotten I had written, with an example showing sigfig, here.

Did not know there was still interest. I got complaints that the doc that I shared does not have working links. It seems those were stripped by who-ever (or which-ever machine) placed it on that doc website. I have no knowledge of that.

We have release C43_105 available for download, for DM42 and Windows simulator in a combined ZIP file, here on my web site, or here the source as usual, here on Gitlab.

It is about two months after the previous release, this release fixes a number of bugs mentioned here, on the Gitlab pages, and in private mail. This release adds a few new bugs no doubt, which I'd like some reports on. Thank you for the reports. Dani helps a lot (you can follow some discussions on Gitlab here, unless it bores you to death).

There were many many behind the scenes changes coming through from WP43S in the development system, and it surely was (and is) challenging to fix everything which broke due to upstream changes. Most functions and hacks should be back to normal again.

I do not know if C43 runs on older versions of DM42 DMCP software anymore since I updated my DM42's. Rather just update to the newest, that would be good anyway, here, SM download page. In terms of loading the firmware - it is still the same way as previously, i.e. a single pgm file, (plus the PROGRAMS directory) to be copied to the flash drive. The new 2-file system has not been adopted as yet and I will delay the introduction of that as far as I can.

There are numerous updates and small changes, improvements, etc. that came over the two months since, but below I will discuss only the biggest changes. If you follow the 43S development pages, you will see that Mihail is pouring in some stellar work on matrixes which will be coming soon. This release intentionally is before his release, because that may (or may not) take some time to make sure it works on all the C43 hacks. At the same time Benjamin is adapting the compile systems, so another reason that I release this before updating to the dev system. Yet again that may take some time.

Before I jump into the additions, I want to acknowledge the brilliant people on the 43S team, from the seasoned members we know already to the new ones I mentioned here. Well done and thank you.

Some major changes came to C43 with the trig settings. We reduced the number of angle conversions inherited from WP43S in CONV to what we believe is practical, and kept the experimental [>>DEG] ... [>>DMS] functions added some months ago, and added another wild card function, the [DRG] button.
.

The WP43S introduces the concept of tagged angles, and also Angle Display Mode (ADM). The set ADM determines in which angular measure the result of an arc function is displayed. Conversely, for the trigonometric functions, the ADM determines to which angular measure a longint/real value in register X will be used, as a longint/real has no angle tag. This means that it is not necessary to enter a tagged angle "by hand”, as numeric entry will default to the ADM.

If you still want to enter a tagged angle "by hand", this should be done as intuitively as possible. Inherited from the WP43S there are several functions in the menu CONV to enter tagged angles to the desired angle measure. The C43 has a new additional function DRG in the MODE menu. With DRG you can now change the angle display of Register X to the desired angular measure, cycling through the 5 modes.

You can enter a numeric angle to Register X, closing the entry with DRG and a tagged angle will be set according to the ADM. For example, if the ADM is set to "D.MS", entering 1.505 [DRG] will result in 1°50'50.00''. Additionally, the tagged angle can be converted to the next angle measure by repeatedly pressing [DRG]. The supported angle measures are the same as in WP43S.

This DRG button works surprisingly easy. Of course, all the WP43S conversions remain in the catalog for programming and compatibility. To me the most exciting bit of the DRG button is the ease with which it can get placed on the special (non-USER mode) custom key replacement for [Σ+], discussed a long time ago here. See the [KEYS] menu. This is my go to setting, see below.
.

[/color]
.
I finalised the implementation of the Linear Regression module for the WP43S from Walter's manual and added my graphics to it, then re-imported the code back into the C43 base. I made some neat demos, which can be found by going to f [STAT] then [Dn], to get to this menu.
. 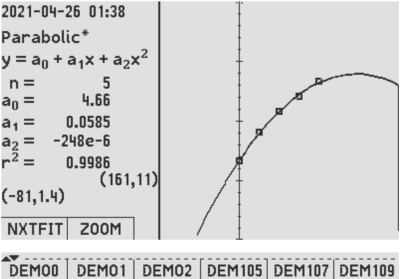 The important version info is placed on the stack after RESET, for easy access. The other version number comes from the 43S or compile system. It is not meant to reflect 103 or 105.

To get to L42 equivalent, try set the keyboard to DM42: Go to the KEYS menu and select DM42. That will put the L42 key layout on USER mode keys and select USER mode. You can manually switch USER mode on and off. You can try that on 103 and if comfortable with it, load version 105 and do the same. Let me know if it works.