It feels about the same as the rest of the keyboard, but given that there's still some slight variability among the keys (my Rdown requires more force than TAN, for example), it's difficult to say on which side of the mean Enter now lies. It feels a hell of a lot better than when I got it, though.
Top

I think my issue with the keyboard just went away!

I got a new sheet of slightly larger (and softer?) domes from Switzerland. I had to improvise on the installation procedure, but I got them perfectly aligned (and I can see how that might have been difficult using the procedure for the Voyager models).

That, combined with gently pressing the keys before closing up, seems to have done the trick. Now I have a totally enjoyable experience calculating all and sundry!

Thanks, Michael!
DM42 #40 running C43 | DM41X #50 | various HP models
The earth is flat. It just appears round because it is massive and curves spacetime.
Top

The shift key on my DM 42, sn 03805, has always been tricky to use, it seems to register about half the time. This morning I noticed that there is a slight gap between the upper and lower parts of the case in the corner nearest the shift and exit keys. I opened the case to see if something was misaligned but found nothing amiss. I carefully aligned the slots and tabs and reattached the back and the gap is still there. Is seems like the keyboard bezel may be slightly warped. Any suggestions on what I might try next?
Top

I just opened up my calculator to try cesar's Post-It note (or supermarket own-brand sticky notes in my case) trick to fix the non-clickyness of the left hand side of the ENTER and it worked great! The ENTER key on my DM42 now feels the same all across its width.

I also followed Logan's procedure to flex all the keys while I was at it. (I've done it before, but I thought a little more couldn't hurt.) Some of the top edges of the keys rubbed got caught against the holes in the keyboard escutcheon while I was doing this due to some minuscule misalignment, but it doesn't happen for normal operation of the keys.
Top

These mods worked very well for me.
Top

Just received my new DM42 3 days ago and on the first day of use discovered that many keys don't register after the tactile feedback (click). Some require considerably more pressure to register, others require only slight pressure and yet others work as expected (i.e. register after the click).

This is unacceptable for a new unit and I certainly am not going to open this up and fidget with screws to get it right. If this is suppose to be carrying on the HP tradition, I have a number of old HP calculators and none have ever operated like this.

Hello Victor, I'm sorry for that.
Please send me an email to sort things out.
Top

This is how I voided the hell out of my warranty, fixed my keyboard, and recommend you do not attempt the same.

First of all, I love the DM42. It is incredibly capable, feels nice, has a great display. However, I also can't use the DM42 as it was delivered. The keyboard was not usable for me. Several keys on my keyboard required a harder push AFTER the tactile click in order to register a key press. Coupled with it's already much higher force, I would find that my calculations were off and only then notice that a digit was missed. On my keyboard, the 8 and 9 as well as several other keys exhibited this behavior.

So I couldn't rely on the keyboard or became paranoid when I would use it and it really slowed be down.

I figured that rather than be an expensive paperweight, I would make it usable.

Another thing I want to say is that I have a background in engineering and manufacturing and I am painfully aware of how difficult it is to manufacture high quality in low volume, even for a high price. It's easy to say that something should be cheaper, or better built, etc. until you start factoring in the benefit of an outsider's perspective, hindsight, and the resources required to properly identify, source, and then acquire or build hardware-- and often times low volume production means certain parts that have very high economic order quantities or just plain aren't available in small quantities makes it impossible to source. Sometimes, even the tools and time resources to IDENTIFY the right part are difficult or too expensive to acquire. A low force gage that is repeatable is not a cheap investment.

Anyway, this is all to say that I recognize where SM would have come up with their difficulties, and having said all that, I love the idea of the DM42 too much to just write it off or try to get a refund or whatever.

So I fixed it.

Let's identify the keys that are giving me problems: 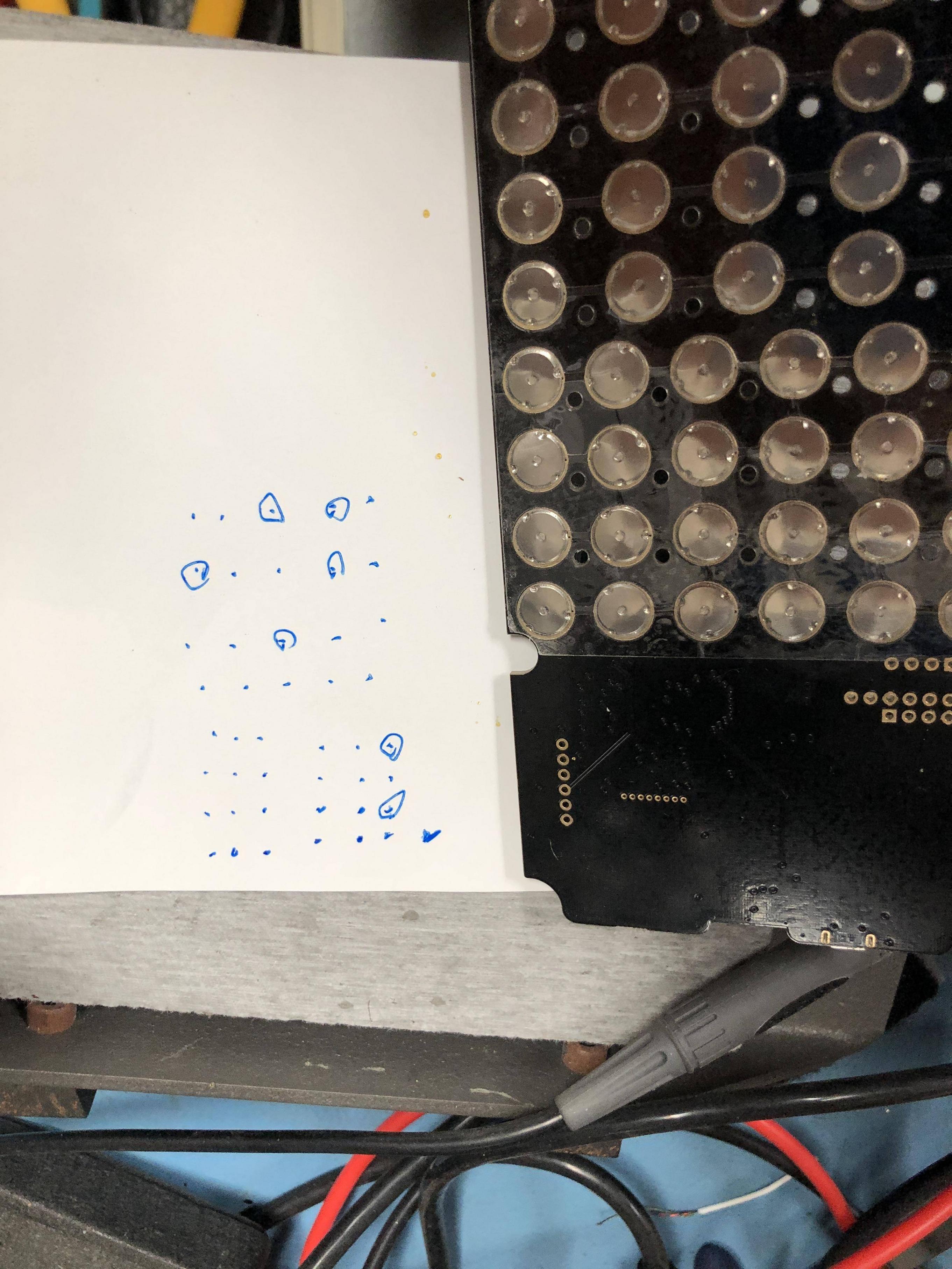 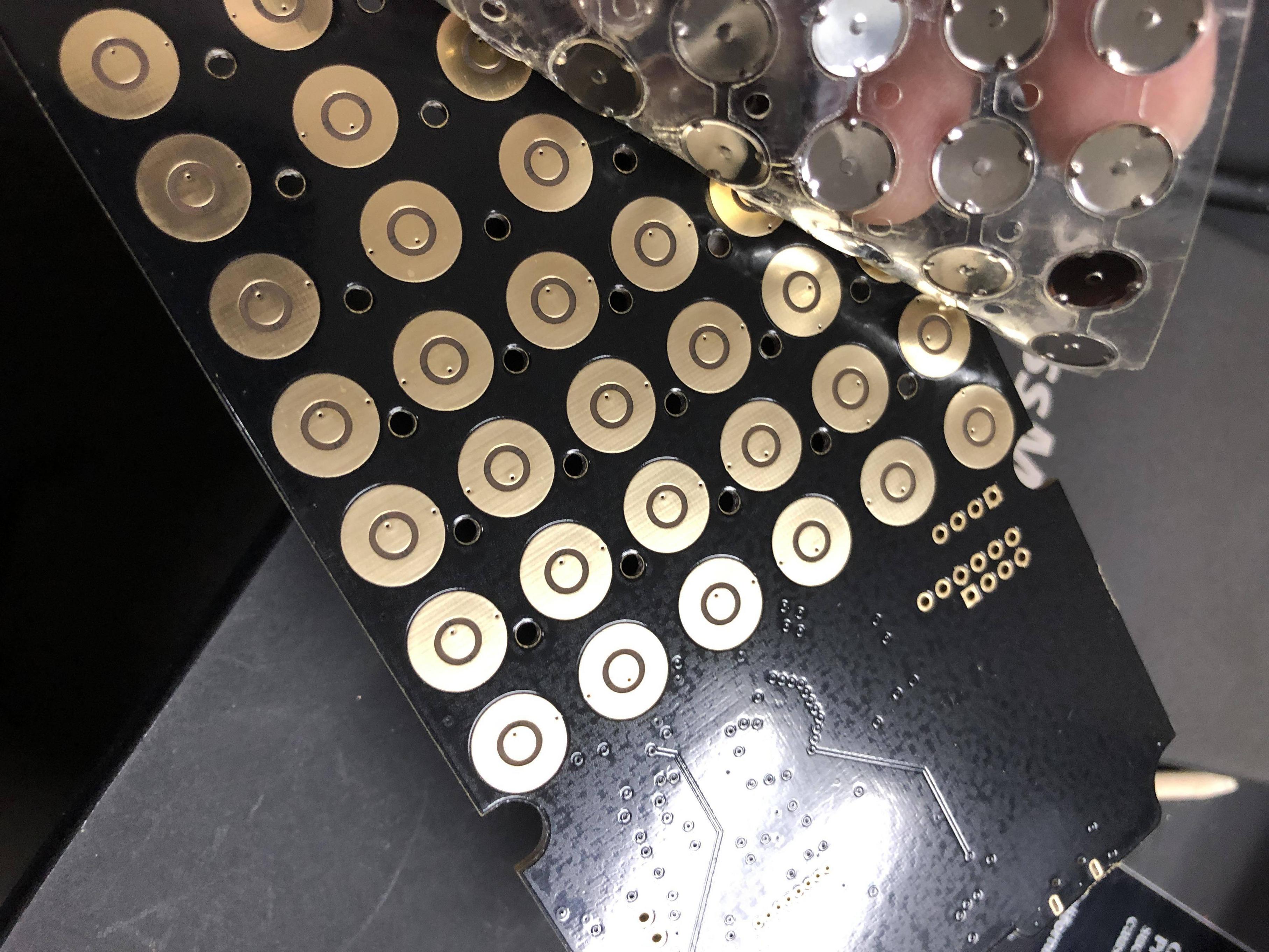 Nice clean gold plated contacts and spring steel domes. Cleanliness is not the issue, though I cleaned the contacts with IPA (75%-- don't get me started on why it's better than pure anhydrous IPA for most applications.)

So these snap domes are off the shelf parts designed for integration in keypads into things like microwave button panels, etc. The issue with these domes is that the tactile point (where they collapse and "click") and actuation point are not exactly matched. This is probably variation in the stainless steel, but what tends to happen is that certain keys will click, but the electrical contact has not yet been made. It might require just a few additional grams of force, but most people who type or click quickly will stop applying pressure when they feel the click. If you intentionally push harder, the keys are fine, but I found that to be very unnatural for me.

Travel on the snap domes is a few tenths of a millimeter, but slightly closing the gap might mitigate the issue.

In order to work on the keyboard, I also did not peel off the entire snap dome adhesive. I peeled it back half way and stuck it on a sticker backing sheet I had laying around. 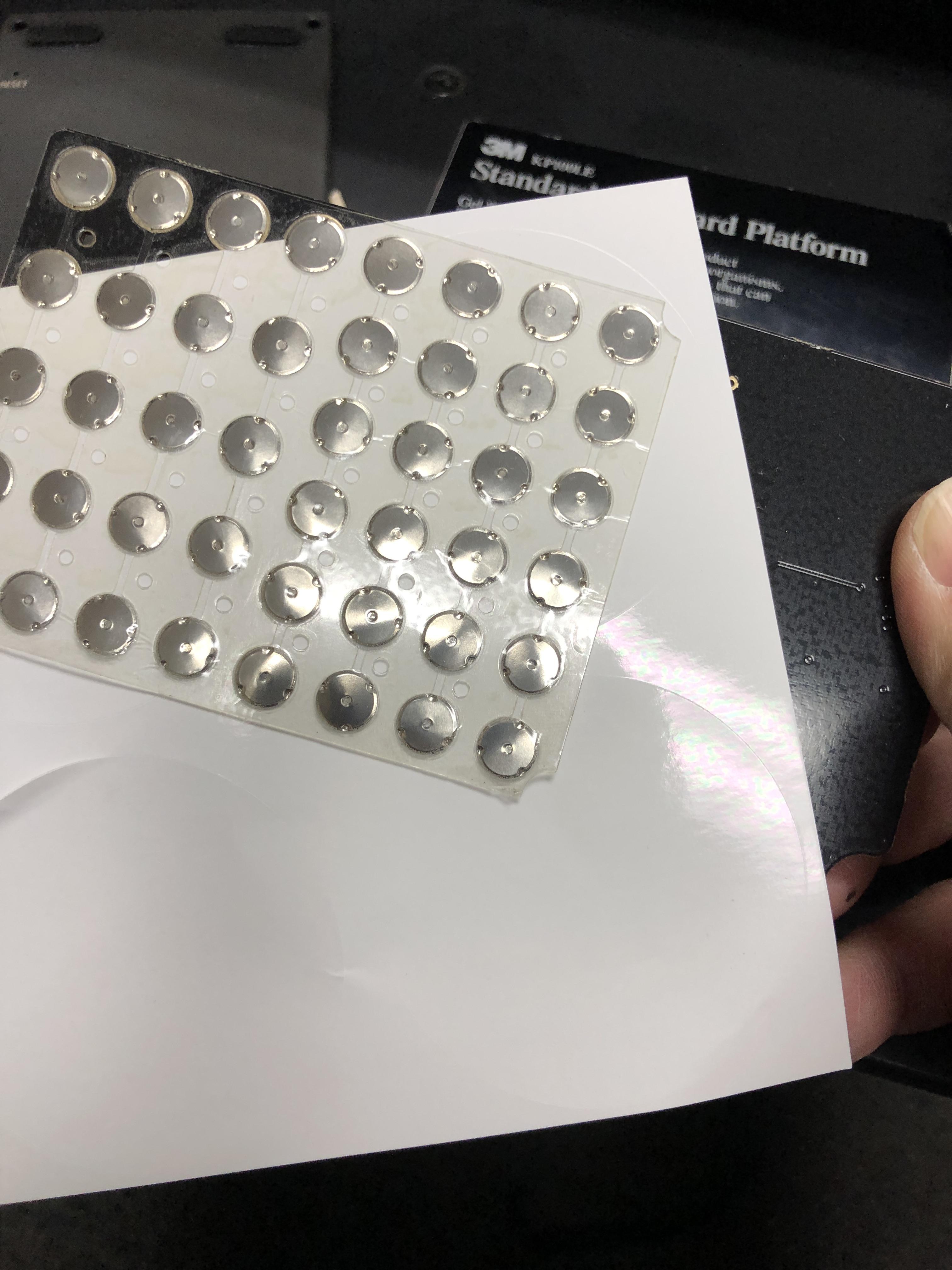 Then I applied a very thin layer of solder to the center pad and removed it with a solder sucker and solder wick where appropriate. 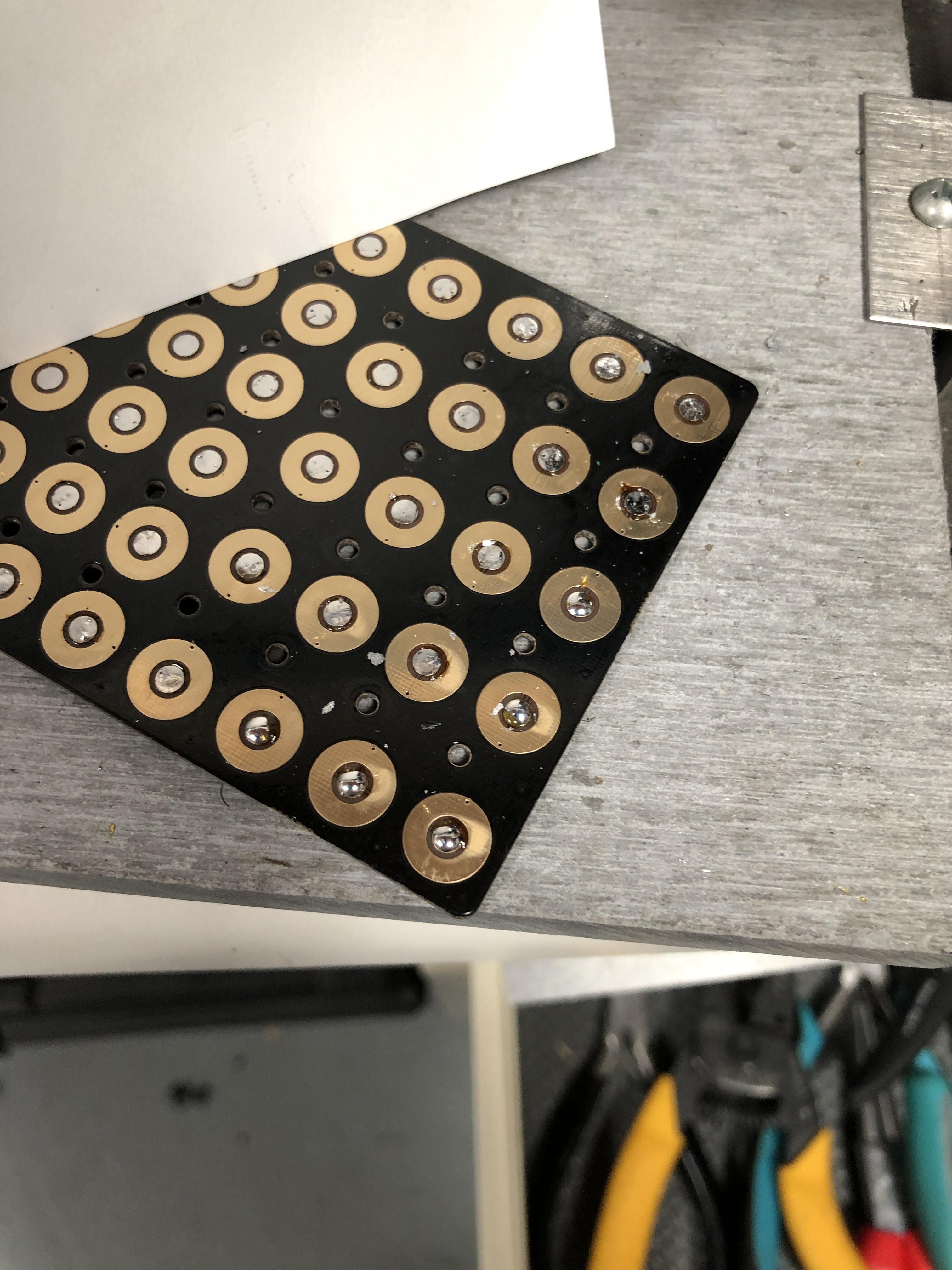 Then I very carefully cleaned and defluxed and degreased everything (wearing gloves).

In the picture, the top half is cleaned, and the bottom half is what it looks like part way through surgery.

This required several iterations to modify the height of the solder on some keys to give a consistent response. I probably reassembled the keyboard about 4 times zeroing in on the problem keys and modifying those only. We're talking thousands of an inch-- just heating up the solder and moving it around closer or away from the center where the snapdome nub makes contact.

Eventually, the keys all work reliably. On rare occasions, one of the keys gives a double input but it is a rarely used key in the middle of the keyboard and only with just the right amount of force. It is perfectly acceptable for day to day use though a key debounce input loop in the firmware would fix it for mine and other keyboards.

THIS IS WHY YOU SHOULD NOT DO THIS!

The gold contacts theoretically will be good indefinitely. The lead/tin solder will most likely oxidize, potentially quite rapidly and render the keys unresponsive. I will probably have to periodically clean them regularly for the rest of the time I own this calculator. I may have shortened its life from a century to a few years. But, in the meantime, it's gone from a pristine novelty piece to a really useful tool I will now use on a daily basis.

Obviously, I would never expect SM to honor any part of their warranty after this kind of modification.

But hopefully, if there's a gen 2, I will be happy to test/buy a new version, and if there's a 43 or some other project they'll get the keyboard thing sorted out.

Am thinking about purchasing a DM15L and possibly a DM42 later on but this issue of key presses reliability seems to persist even with latest production batches of DM42 and given the cost of those units I am hesitating to buy.

I suppose that the DM1xL use the same keyboard technology and that this key press reliability issue affects these units too?

I had the DM 41 (same hardware as the 15) before the 42 was available, and didn't notice any problems with the keyboard. The keyboard on the 42 is generally fine; problems seem to be the exception, rather than the rule. I wouldn't worry too much about it, it really is a beautiful product.
DM42 S/N 00039
Top
Post Reply
195 posts